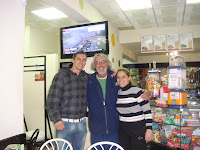 The first three days were spent waiting for my flight out, to attend my sons wedding.
On return the next 7 were spent pushing kicking spitting and cursing as I moved the bike slowly along the coat from Lagos to the Spanish border.
I arrived back in Faro in the evening and stayed the night in Faro waiting to collect the cylinder head before setting off to Lagos and hopefully get the bike going again. My hostel I had booked let me down and in the process of finding the alternative I came across the bar Copenhaga owned and run by Sergio. 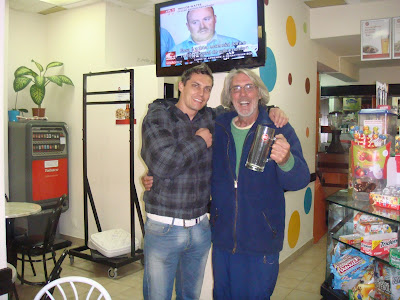 Sergio was great and a lovely man, as I had only asked him directions and he just jumped in his car and took me round there.
The alternative wasn't an alternative after all. They hadn't had any notification from the original hostel I'd booked and I finished up spending a wonderful evening with the locals there watching Portugal thrash Spain. I was taken aback when Sergio came out and presented me with a glass tankard and we became good friends. I spent the night roughing it without a sleeping bag, which was in Lagos, but the following morning I had breakfast at Sergios and collected my cylinder head and left to get the bus back to Lagos
I

Arrived Lagos and had to hang around waiting for Walter to surface to allow me access to the bike.
I replaced the head and tried to get the bike going without success.
I replaced the condensor and had to have that soldered up by the local Renault garage who did it for free..
It still took me a whole day to get a spark going.
I set off at last on the Saturday heading for Carvoeiro to watch the match. I got it as far as Portimao where it refused to go any further. I finished up pushing it the 12 Km to Carvoeiro but amazingly arrived right on kick off. 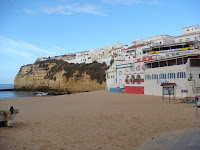 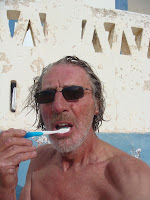 Found Sarahs Joker bar where I was treated very well with a few cheapies.
The following day being Sunday I decided there was no point trying to get it going as I wouldn't be able to get parts, so went off to the beach and had a bath and a few hours of sun. I spent the evening at Sarahs bar but on returning to my bike someone had stolen my crash helmet.
I was concerned about sleeoping there but a stray dog had followed me to the bike and as soon as I settled down the dog lay down at my side and stayed the whole night.
The following day I moved down to the front where I stripped the bike down and made an improvised test lamp with a torch and set about testing all components. I got the bike going to rapturous applause from the waiters in the bars one of whom went home and found a spare helmet. Old but legal pudding bowl type.
Off I went again to Faro and met up the following day at Sergio's the bar owner who I had befriended when I returned to Faro.
The morning was heavy rain so I sat it out till it stopped and set off for Spain. 8 kms as far as the bike went where it broke down at Olnao. I spent the evening to discover a wire had stripped in the magneto. The following morning I took it to an auto electrrician and had a new wire soldered. No joy as I tried and so too did every Portugese moped owner to get it running. I tested everything again and then found wo problems. The points must have had a meltdown when it overheated in Sagres and had twisted and were not in line, and the wire was only connected by two thin strands of copper wire. Another night and another trip to the auto electrician. then I was off to Spain.
I arrived in Ayamonte by the short ferry trip across the river at the border and a shelter on the river side awaited me. 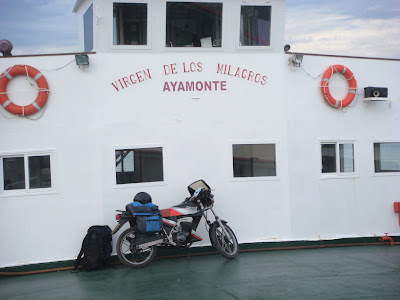 Maybe not a Virgen but a Saint none the less
I was up early as the time clock had altered and had my morning caffeine fix before daylight.
I was off in the direction of Sevilla via Huelva.
It was a rather dull journey, but I was expecting problems getting into Huelva due to Autovia routes.
I was right and as I rrived at the river in front of Huelva the only access seemed to be via the autovia.
I was trying to be good and find the alternative and made the mistake of stopping a policeman for directions for an alternative route.
He took one look at the back of the bike and told me I had an illegal number plate and was not allowed to continue.
I argued with him, all in Spanish that as it was legally passed in England that automatically made it legal her.
He wasn't having it and was ready to impound the bike.
I continued arguing but ran out of luck when he asked for my papers which were sitting on the kitchen table in England.
I offered to hacve them faxed out but he insisted on the originals.
Now I don't know whether it was my powers of persuasion or whether he just realised I was aresident of England but he just suddenly changed his tone and told me I could go.
It was a scary moment and has left me very wary of getting near any police again.
I went back to the old bridge which was blocked to traffic and noticed a cycle path that everyone was using so off I went.
Half way across I was stopped by a mr Good Citizen who told me I can't ride my moto over the cycle path. I agreed and continued.
On to Sevilla and the same problems.
I turned into a rough estate before the rivers and autovia ring road and watched as a stream of moped and scooters came from the direction of the centre.
I traced their route and via a couple of bridges and tunnels emerged at the side of the centre.
It was far too busy to contemplate entering so continued out to pick up the coast again to Cadiz.
Again confronted by the autovias I stopped at a bar for directions and Jose Javier and a couple of other guys whose names escape me, I was not only treated to directions but also a burgher to boot.
They were great lads and I was off again.
I made it to Dos Cabezas de San Juan wheere it started to rain heavily.
Into a bar and later onto another on the edge of town.
I was leaving this bar to find somewhere to sleep when the manager stopped me and gave me a loaf of bread and a stick of Morzilla and chorizo sausage.
I found a sheltered place on the industrial estate and was just about to bed down when the security guards pulled up in their car.
I had a good conversation with them and they said they would check I was OK through the night.
Five minutes later they were back with another guy who said he knew a car where I could sleep and they would patrol every 45 minutes. They took me there and as I was having my final cigarette of the day they returned towing a large plastic sheet to cover the bike.
The estate cafe was open early and was very popular with the locals so after my fix and waiting for the rain to ease off I was off to Cadiz.
The rain never eased and became an absolute down pour. I was riding over the moorlands leading down to coast and was getting soaked right through.
I got to a place by the coast, stopped and squelched my way into a flooded bar, where I got my first taste of ajo. Ajo is like a humus with some bread soaked in and some veg. seved hot it's delicios. I decided to just get on with it in spite of it raining in the sea as the Spanish say and set offto Chipona. A ghost town in the winter and made Aberystwyth look like paradise.
On to Cadiz.
I arrived and rode down the long straigght main road leading to the old town.
I parked and hit a bar where I sat for most of the evening until the clothes I was wearing were dry enough to walk around in.
I took a walk around the old town and was delighted with the bars and the singing of regional anthems at some tables. 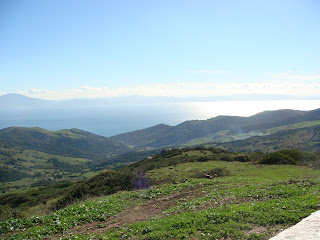 A good nights sleep and up early to escape on the autovia south to Tarif before the police day shift woke.
The road down was brilliant although cold it was gloriously sunny and hardly any cars.
I was taken completely by surprise when I came over the top of a hill and was confronted by a view of the Atlas mountains and Morocco.
It looked amazing and was the first sight of the continent of Africa.


I rode into Tarif and treated myself to a couple of large beers and a ham and cheese toastie to  celbrate.
I left Tarif and then the troubles began again with the bike and the autovias.


The road was a nightmare and at times I tried to be clever and follow a cyclist to find a route only to be led behind the crash barrier of the autovia. I finally came to the conclusion it would be easier I f I just closed my eyes and rode the Autovia into Gibraltar. I quickly found a pub to watch the game and rang the president of the Gibraltar reds, but they were watching oat a pub the other side of town to me and it was too close to kick off to get there in time. I did manage to meet 4 Gibraltan reds though but alas we were suckered by Spurs 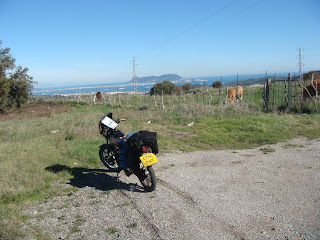 I watched the game and booked into a hostel for the night, where I met with a guy who was raised only a mile from my home in Liverpool. He was off back off home to the Pool and was trying to convince me to go to Tangiers instead of Barcelona. It was hard to resist but I stayed faithful to the ride. I woke to the worst rain I have ever seen. There was no sight of the Rock as the rain engulfed it. I walked into town and it was so wet I stood under an awning for two hours and still finished soaked through from the water bouncing up from the pavements.
After two hours rooted to the spot I decided, buggar this for a game of soldiers and went to the pub where I removed all my wet gear and sat there till most of them had dried out sufficient enough to go to Morrisons and buy myself some cheap dinner,
I finished with a couple of Spanish bars before locating the only quiet shelter I could find which proved totally inadequate against the next belt of rain that engulfed the rock during the night and following day. So much for Andalucian sunshine.
at January 11, 2011