Living on twenty euros a day back home can be difficult at times but in France it's nigh on impossible. That's why I gave myself a whole week to cross the southern coast at a leisurely pace. That would mean cutting down the cost on fuel which is working out at anywhere between one fifty and one sixty euros a litre and thereby, leaving me my usual quota for food coffee and beer, although coffee and beer is so expensive I had ruled bars out for the week and decided to buy one euro litres of wine from the supermarket.
That was going to be hard as my only comfort in the evening was to sit in a bar and watch football till I was ready to crash. Instead I was facing a wino's existence of sitting with a waxed carton of cheap vino  in a park somewhere or other.

She beckoned me to go to the Tourist office with her as the woman there spoke better English. I was asked to prove who I was and what I was doing and we tried the internet there and were surprised to get access to the blog. They were surprised to find I financed the ride myself and believed originally that Unicef were funding it. On realising this, one of the two women there went straight out and bought a sandwich and some fruit for me. Before I could tuck in I was told I had to meet there at five to be taken to my 'hotel'.
I devoured what I had been given for lunch and at five prompt I was at the Office to be transported to the refuge.
I was told that at eight I would have to come down and collect a tray which would have my evening meal and some bread rolls and jam for breakfast. It was heaven. I rushed back to my bike and returned and had only just showered when the young woman downstairs brought my tray to my room. I immediately made sandwiches for the following day and pondered how much to eat and how much to save. I went onto the balcony for a cigarette which I had to make with till receipts as I had run out of cigarette papers earlier that day. I was using super glue to gum them and it was like smoking something from Runcorn ICI.
I slept well and woke for a meeting with Monsieur Noir of Social Services. They couldn't find a solution for me and I was back on the street again.
At least the sun was shining now, although the wind was blowing strong and was still cold. I went to the beach and ate my sandwiches and was sure I had lost one and patrolled the beach and promenade for a sandwich I had probably gulped down without noticing.I had a guess on Marys e-mail address and got a text back confirming I had struck lucky.


I ran back to social services and sent an e-mail asking her to go to my bank which is a credit union and deposit cash direct into there. I was feeling very optimistic now that everything would be sorted that day, when I recieved a text back telling me my bank would not accept a deposit without the necessary membership card. Total deflater and I was resigned to a lonely weekend. At five I got a text from Neil in Madrid telling me that Western Union was the answer. I rudhed to the police station to enquire where the nearest Western Union branch was. I was in their staff room while they were searching phone books till one of them found through his brother, that the La Poste handled Western Union money transfers. I spotted a coffee machine selling coffee at thirty cents and asked if someone would buy me one. I instead found myself with a large shot of Grants whiskey instead.
So next morning I would get a message to Neil and then collect my money from the post office and get moving again.
I found a new place to sleep next to a pizza retaurant, and caused a little bit of concern with the owner as he thought I was trying to nick his umbrellas that were folded up in the same area. I explained my position to him and he was fine. Although I felt like getting my head down rather than walking aimlessly around, he suddenly found himself with a lot of customers, who would have been able to see me from their tables so I decided to wait till the end of the night before settling down. I was walking past there in the course of my wanderings when he rushed out with a sandwich for me. Great bloke.
It was 2 am before his customers left and I was getting evrything sorted when his wife brought me a cup of hot chocolate.
Saturday morning I was off to the Tourist Office to e-mail messages and off to the post office to wait for the cavalry.
I eventually got a text to tell me it was being sorted. The post closes at 11.45 and it was 11.35 when the text arrived telling me he had failed. 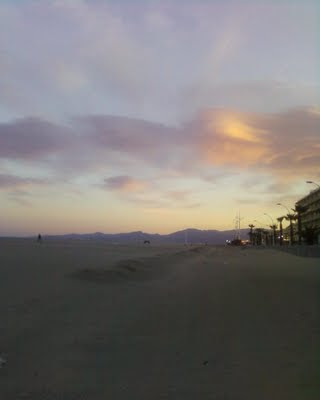 I was gutted and left to go for a walk and past Laure. I could just barely explain to her and left her quickly to get some air on the beach. The text came through that I had given the address as La Post instead of Banque Postal and the internet rejected the initial attempts. It was now to late to do anything.
There was yet another market and as I walked back through the stalls there was Laure with a choc pain and a sandwich and some fruit courtesy of the cops in the station.
I had lost my tobacco the night before and had no cigarettes so I went for a long walk looking for good butts that I could smoke.

France being France and the smoking ban not seemingly having any effect on the habits of the French I found plenty.
It was a long day and I retired early under the awning in frony of the news agents that was pretty private.
I woke on Sunday morning to another market , a choco pain from Laure and decided I would use the six euros of fuel I had bought those days ago at the Intermarche to ride on as far as I could and then wait for my pension to arrive at one a.m. the monday morning.
I borrowed one more euro fro Laure to buy a book off a stall about the french guy in a wheel chair who hitch hiked around the world.
It seemed a rather fitting way to learn French.
I was off and on a slow ride to Bezier.
I reached Bezier after passing twenty kilometres of countryside with a prostitute sitting on a fold away chair every four hundred meters in the middle of nothwhere.

I hoped that I would find a place with a bank, an all night garage and an all night bar, for apart from the whiskey at the cop shop, I hadn't had a beer for nearly a week.
I was at the bottom of the big hill that Bezier sits when the fuel I had bought six days ago expired. I pushed it to the top and into the town centre and found the local artists exhibition area, where I managed to scrounge a cigarette. I got talking to a German woman who lives in Bezier and got the weeks news about the bombing in Lybia and a whole lot of stuff I had no idea about. They packed up and it was a case of finding a secure place to wait for the pension to arrive, I found a place which turned out not so quiet as I was woken at two in the morning by rowdy French revellers acting grossly immature and in a way we're led to believe only the English behave.
I trierd to charge the credit on my phone and bingo. I had money.
I went straight to the cash nachine and drew every penny I had out in case of any further fuck ups.
Fuck it was like the end of the second world war
Liberated in France
at March 15, 2011