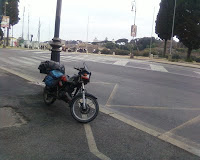 I left Franco and Gos and the family at the farm after Francos friend arrived to transport him to his DJ gig.

God it was so good to have the bike running smoothly again and the ride down to Rome was a delight.
I was running slightly inland as I wanted to reach the Rome area for nightfall, but I managed to stop at a really delightful village in the small hills south of Grosseto, called Magliano di Toscana, before landing in Orbetello, which has a large lagune.

The weather by now was hot and sunny after the dull Easter Weekend and it wasn't long before I reached Civitaveccia. It was like arriving in Blackpool after riding around the Dales. It did give me a chance to grab a cheap snack at the MacDonalds though before setting off to the coast west of Rome.

I reached a resort called Fiumicino near to the airports and quickly found a bar by the river quayside and then a sheltered canopy for a nights sleep.
Francos gift of a sleeping bag was fantastic and I managed to get the best nights sleep for at least five weeks of riding.
I woke in the morning to find the rain had arrived. I found a coffee and a croissant and left immediately for Rome.
Rome was a nightmare to navigate due to the Easter holiday and the Pope doing his tour and speech.

I found it impossible to get near the main sights to take a foto of the bike there and settled for a distant view before heading east to Pescara.
It was still raining when I reached Tivoli but the rain died off as I started the climb over the mnountains to Carsoli At first it wasn't exciting me that much then suddenly the scenery became more dramatic and breathtaking.
﻿﻿
﻿﻿﻿
﻿I stopped near Carsoli for a beer and a very large sandwich, that was almost a pig on a ciabatti. All for five euros.


Off I climbed going higher than the motorway which was spanning valleys on lengthy viaducts at incredible heights until I reached it's heighest point and emerged the other side in front of snow covered peaks, before dropping down to the valley where Avezzano is situated.

I misread a signpost there and finished up taking a wrong rout further south than Pescara but a fuel stop and advice from the attendant sent me back to Avezzano and out on the right road. 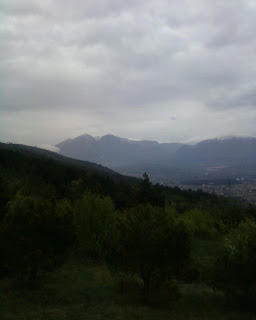 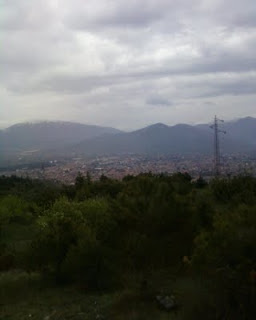 The temperature was dropping and I was faced with a different landscape as I climbed out of the valley.
The ruggedness gave way to a moorland type of landscape, yet was just as high in altitude. It looked like it might start snowing rather than rain and the wind was howling over the tops and slowing me down to a crawl.
I was on a particularly long uphill stretch when I noticed a shepherd with four sheep dogs, that had pulled a flock of about five hundred sheep into a tight circle. I got excited about the thought of watching a demonstration of sheep herding and was thinking of stopping and having a cigarette, when I noticed the four sheep dogs had left the flock to intercept me as I climbed that hill.
I was a far distance away from them on the road but the angle they chose to approach, meant that there was a risk of an interception. They weren't border collies, they were these big white haired things that looked a bit like a labrador in size but fiercer. I was guaging their speed of approach against the speed of the bike up the hill when I realised they had a better chance of catching me than I had of escaping. They were nearing the road and getting closer and closer and I was almost twisting the throttle into a mangled state with tension.
I can tell you I was terrified. If they had got to me, they would have knocked me off my bike with ease and with four of them and the farmer some thousand metres away, I feared for my life.
The dogs reached the road two to three yards behind me and I can only think that the long run had sapped some of their energy, as I slowly increased the gap between me and them by a yard a minute. I had one last look over my shoulder to see they had stopped their pursuit and had decided to return to the flock and hopefully get a kicking off the shepherd for abandoning their duties.
I was still shaking when I reached the summit, but quickly forgot the experience when I surveyed the road down.
It had all the hallmarks of the road down to Bilbao from the top of Cantabria in North Spain in similar climatic conditions. 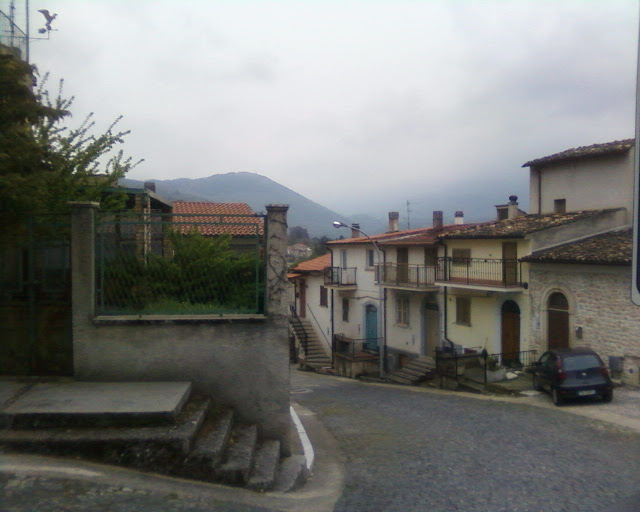 It was the SS5 from Collarmele to Raiano if anyone is looking for good riding roads, but any road in that region will I am sure give you all you need.
﻿﻿﻿﻿﻿﻿

I flew down there, taking hairpim bends and chicaines as if I was on the Manx TT with a beefier bike. It was going so well that I missed the sign that told me the road was damged ahead and I was suddenly confronted by the tarmac which had cracked over the whole section of road making it virtually unridable.
My attention was so focussed on avoiding the ruts and the gullies, while trying desparately to slow my speed. I missed the following hairpin sign and had to focus all my attention on stopping straight, facing the embankment of the hill ahead of me.
I stopped in time and rode the rest of the way down at a modest pace.
﻿﻿﻿﻿﻿﻿

I stopped at the bottom in a tiny village for a coffee, befriended the locals outside the bar before riding on another ascent that follows a gorge to the summit before catching a glimpse of the flatlands to the east through a gateway in the rocky cliffs that rise above the road. 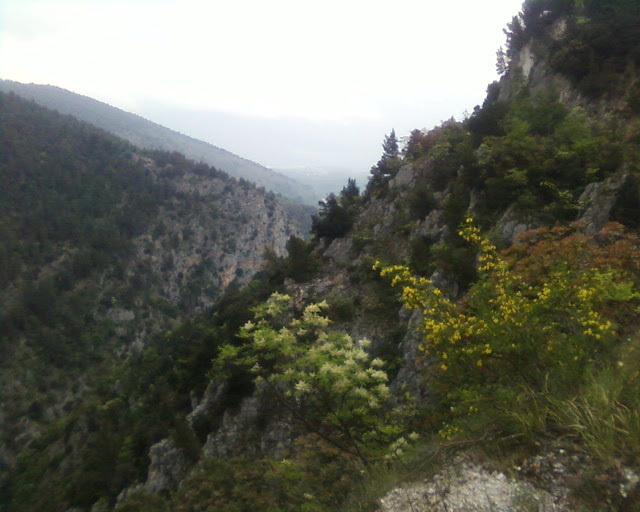 It was then a question of dropping down and joining all the bank holiday traffic going home from their travels in the country.
I only had one more issue going through to Pescara. Some motorists don't like mopeds going down the inside.in heavy traffic, but I have been caught out ion the inside on occasions unable to get back in when the traffic starts moving again.
This one particular guy tries to block my route through on the small area for bikes at the side of the road.
I held back and thought right I'll go on the outside and as soon as I made the switch he just edged me out into the face of the oncoming traffic.
Fortunately in Italy they don't get points for a head on with a moped, so the traffic all got out of my way.
If it hadn't been on the edge of darkness I think I would have swerved in front of him for an insurance payout for the unicef fund.
Arrived in Pescara. The station was closed all night so I slept outside. I then headed north on the most boring route and coastline ever.
Approaching Rimini I snapped my clutch cable but was fortunate enough to get a replacement the following morning at the expense of damaged knee ligaments pushing the bike up a staircase at a rail subway underpass.
I didn't get a good nights sleep there, but I managed to find a really nice beach area in a nature reserve that was away from the straight line beaches of the Adriatic, where I was able to take my daily bath and have a sleep on the beach in the warm afternoon sunshine.
It took a while to escape from there as the only through route is 5kms inland.
I returned to the main road and decided to not race to Venice but to pull into a small town just off the main road called Porto Viro.
I rode through the town and eventually found a bar that looked good.
The guys there were fantastic and treated me like a hero. I managed to watch the Barcelona Real Madrid game while drinking the small 8% beer they had.
I lost count of how many I had and foolishly rode off looking for a sleeping hole. Fortunately I didn't ride far as I found a great location and a bar that was to provide me with the knock out blow.
The place I arrived at to sleep had just been block paved and was covered in sand so as to settle between the blocks. Being drunk and an ex garden designer I spent a couple of hours helping the wotkers finish it off.
They must have thought the fairies had come during the night to help them.
I was worse for wear in the morning but eventually got going and arrived at Venice, but having my gear on the bike wasn't able to look around. I was fortunate enough to have stopped in Chioggia though which I thought was probably a nicer place which had all the hall marks of Amsterdam and Venice without the crowds of tourists.
I left Venice and headed out to Treviso and slept the night at the station where I was mistaken by a nice guy who thought I was homeless and discretely left a carrier bag near me with a large ring cake and six croissants. I have to say it was delicious cake and am extremely gratefull for that little luxury.
The following day I found the airport and found a motorbike dealer who agreed to hoiuse the bike till I returned in three weeks. A big thanks to NordMec Automobiles there for that.
﻿﻿
﻿﻿﻿﻿
﻿﻿﻿﻿
at May 13, 2011