I must have been tired when I arrived in Viareggio as I pulled the bike up to the wall and quickly lay down between it and the wall and fell sleep at 10pm. It had been a long day, constantly aware that at any moment the sprocket would give up totally. Add the steep climbs over the Passo Giovi and the tension of crawling it up there resulted in total wipe out.
I woke in the middle of the night, I think and took up a place in the waiting room of the station.
The morning I was up with the first commuters and off to find a bank for cash and subsequent coffee.
I made the decision to give the sprocket another notch filing and settled for the harbour near the big yachts.
The reason for this was a rail where I could hang the back end of the bike from, using my bike lock as a hanger, in order to remove the back wheel.

I spent all day filing it until I realised, I had gone beyond the limits needed for the chain to wrap around.
﻿
﻿

I decided to try it though and re-assembled the bike and went off for a ride only to find the bike was in a worse state now than before, with the chain making grinding noises, as too was the bearing on the gearbox under the strain of the tension.
I had found a supermarket when I had arrived the night before, which had a Honda showroom in the same complex, so I decided to go and have lunch on the cheap there and enquire about a replacement sprocket.
I grabbed a sandwich and a bottle of beer to swill it downwith, but managed to throw the contents of my stomach back up and into the car park.
The Honda dealer was even less successful and his only advice was to try a Derbi dealer in Bicchio.


I decided instead to remake the sprocket and reduce the number of teeth in doing so, as the circumference would be a couple of inches less after filing it down.
I located a tool shop and bought a round file, but wasn't prepared to waste money on a measuring tool. A costly error. I then located myself down by the beach and this time used a bike rack to mount my bike on leaving the back wheel suspended in the air to facilitate removal.
I then spent the next two and a half days filing it down to accomodate the thirty eight links of the chain.
It was painful and my arm was almost dropping off at the end of each day. It seemed to be going well as I was testing the chain on the teeth regularly, but as I worked my way around the sprocket,  it became obvious that my guesswork on measurements were slightly out and there wasn't enough space on the sprocket to accomodate the teeth comfortably. It was in effect lob sided with 19.5 teeth on one side and 18.5 on the other. I tried to file the teeth and shift them tound the circumference but was losing the area of each tooth as I did so.
There was only one thing to do and that was to put it on and try it. It worked to a point, but as I picked speed up, it tended to surge every time the chain passed over the tight part and slow down when on the looser teeth. This I found out the day after I attended a concert at the hall where I was working. They were having a young persons band night sponsored by some well known Italian patron of the arts. I had got talking to five lads who spoke better English than me, who although were from Fiorentina had LFC as their Premier League alternative.

I watched their performance and it was superb. In fact the whole night would have been good had it not been for a typical Italian presenter who interrupted the second bands performance on a couple of occasions. On one of them he invited the patron to make a speech which lasted a good half hour leaving the band standing there twiddling their thumbs. Classic comedy.
I had a morning of finer filing of the sprocket and a drink with the owner of a yet to open bar who I had become friends with, during my time working there, then decided to head off, with the sprocket as it was.
I found the Derbi dealer on the way out of Viareggio, but he couldn't help at all so I continued down to Cecina where I spent the night in the waiting room and the morning still trying to take the ovality out of the sprocket.
I have to say, as bad a job as it was, it was working reasonably well and I reached Grossetto in no time.
I needed a bank and then I needed a five euro note for the automatic petrol station so after withdrawing some cash I found a bar just outside the walls of the town. 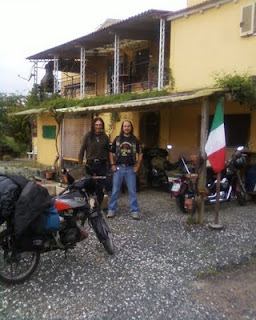 There were a couple of lads there drinking and they were out to look at the bike as soon as I parked. They knew it was a derbi and were very impressed when they enquired as to how I had arrived there. When I told them the problems I was having with the sprocket, one raced off to get a drill and was going to help to re-adjust the teeth, though I don't know how. Without me knowing it, the bar owner made a call to a biker who lived fourty kilometres away and this lad, who was nicknamed Paco Loco jumped on his bike and rode all the way to Grossetto to my rescue. When he arrived on his Moto Guzzi he immediately assessed the situation and invited me back to his house, where nearby lived a friend of his, who was a mechanic and engineer.
﻿﻿﻿﻿﻿﻿﻿﻿﻿﻿﻿﻿

Paco or Franco as his real name is fed me, offered his house as mine, which included laundry, food and a shower.
The following morning after coffee we were off to his friends armed with a worn sprocket, for his friend to engineer to fit my bike. As it was, his friend had a new sprocket which still needed re-disigning with the lathe for the princely sum of thirty euros. It was a perfect fit and after it was finished and fitted to the wheel we went back to assemble the bike.

As we were working on the bike, I just happened to look up and see, the farmer where Franco lives, slaughtering a number of rabbits. It was my first experience of life in the country and at first I felt a bit queezie but then realised I had just eaten a pork lunch without any regard for how it got from the stye to the plate.

We were later joined by Gos from North east Italy who was down on his big cruiser for a weekend. We ate and drank the evening and the following morning made some minor adjustments to various bits. Franco was waiting for a friend to collect him and his mixing equipment as he was DJ-ing that day.
Franco was a top guy who is head of the Roadrunners in that area. The roadrunner family exist throughout Europe and do much charity fund raising rides of their own, but I never expected to be the charitable cause. One final gift from Franco was a sleeping bag which I had been without since Valencia. Something I will be eternally gratefull for as I suddenly realised the difference in luxury in the nights ahead, compared to the discomfort I had deliberately put myself through since Valencia. 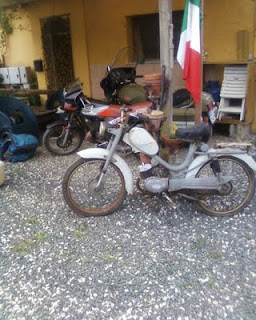 His friend arrived and made a classic remark

He reckoned my Derbi was that slow the flies were crashing into the back of my helmet instead of my face.
Great lads who I hope to see again when I finish my rides