Five Fingers for Luca Jones Ireland the 2nd Half

Conamarra was beckoning, but the rain was driving in. I waited in the hope it would ease and went for a coffee and a sandwich at a small cafe at the back of the main street in Westport. The cafe name escapes me but the couple there were lovely and treated me to my breakfast when they overheard me talking about the ride to a friend in Galway.
My friend had called to offer me a room a shower a meal and wine for the coming evening and I was filled with dread that the bike may fail en route and I would not only miss some good company but all those luxuries.
I finished my breakfast and set off to hit the coast in the driving drizzle, my face stinging as each tiny droplet hit it's mark om my cheeks and chin. By the time I reached Croag Patrick the rain was beginning to ease and I was feeling a bit happier about the rest of the day as the scenery is superb and not to be missed. 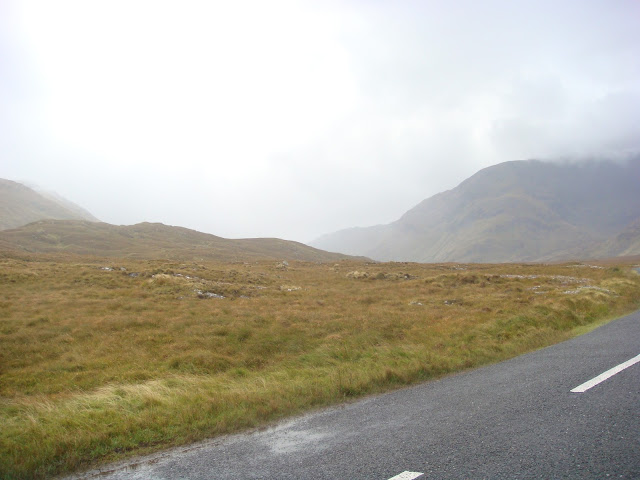 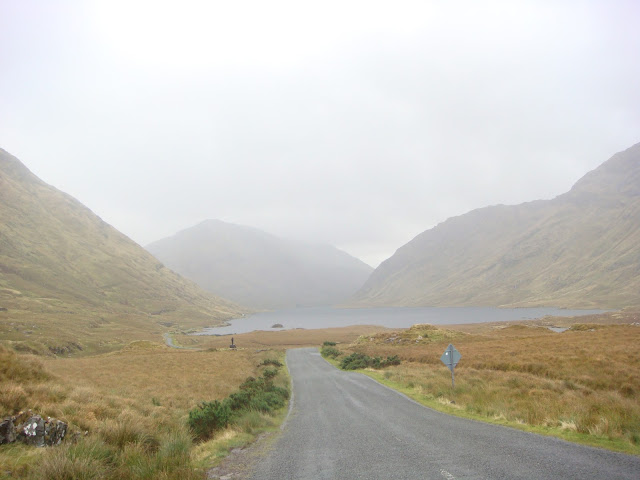 I turned to head through the mountain pass at Cregganbaun only to see a curtain of rain across the valley and obscuring the view through to the laugh beyond. Grimmacing I decided not to hang about but to ride on through. The wind was coming from all direction off the contours of the mountain and the rain was hard biting and horizontal at times, but on I rode till I emerged at Killary harbour, Irelands only fjord at 16kms length.
Heading back out to the coast was wild but sunny as I got clear of the mountains. Conamarras a beautiful landscape and the coast although flat has a wild beauty about it. 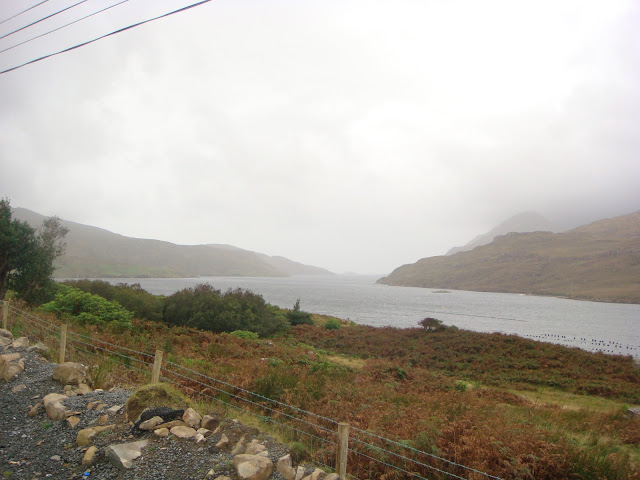 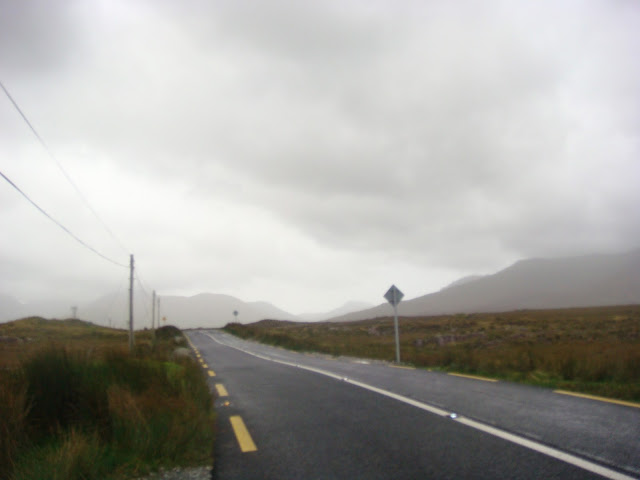 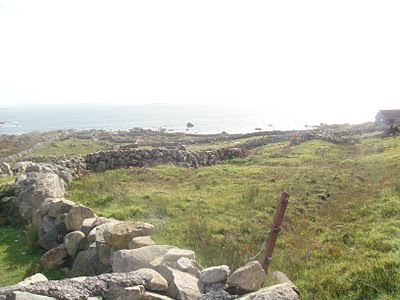 Returning inland to Galway was a blessing with the wind finally behind me and I was soon arriving in Galway. Coming in along the bay I was amazed at the amount of stone walls and how close they are to each other, delinesting small strips of land. It was explained to me that they weren't walls but orderly piles. There is so mush of the stuff, theres only one thing to do and thats make a wall.
I met my friend and after a couple or more Guinness we were off to his place, a house designed in the manner of an Irish Hay Barn, but classy. It was all his own design and worked well even though it was of modern build.
A great night was had with someone who I only knew on a forum, but found a great affinity to while there. They were a really great couple.
The following morning after a full Irish, I was heading down to the Cliffs of Moher
I was diverted from the coast due to road works and had to approach from the South, and to my dismay found that there was now an entrance fee to pay, to view the cliffs. My bike was starting to give me trouble, but was still running but after stopping for a cigarette, the bike blew over yet again in the wind and wouldn't start again. I intended to try a small road further away from the visitor centre, but once I got the bike running again decided to keep going onto Tralee.

The bike still wasn't right, but I Struggled it down to the ferry across the Shannon and then the short distance to Tralee. It was Arthurs night. Celebration worldwide of Arthur Guinness and when I arrived in Tralee I found every pub selling Guinness at €3 a pint and was quick to join in. Especially after paying €3.80 previously. 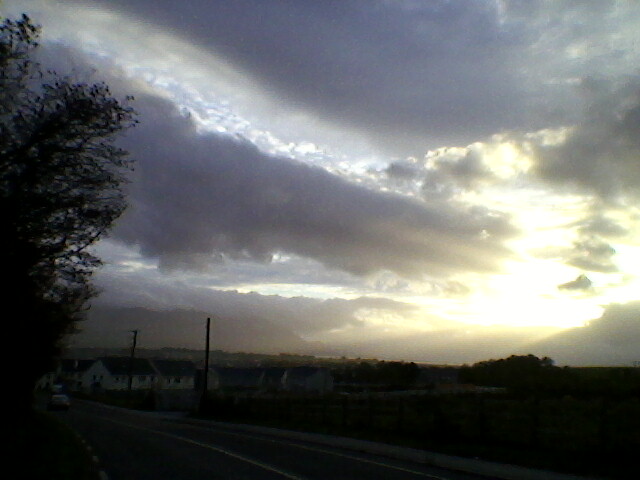 I settled for a pub with live band and outside area where you could listen and still see the band. It was full of drunken students and I had to remove two over exuberant drinkers off my bike. A little later, and I'm sure it was a prank, I had a fresh pint of Guinness taken from under my nose as I texted on Twitter. That was enough for me and I found refuge in an older mans bar, that respected their fellow drinkers.
It was there I met a great guy who was up from Waterford on IT work who had a spare bed in his hotel room. He kindly offered me the opportunity which I took. We had drank heavily, mostly at his expense so I was relieved to be able to buy him one in the Hotel Bar.
I took every opportunity to recruit young men to be a donor of bone marrow cells and he was not excluded and he promised me he would do so. I do hope he did.
After turning down the opportunity to 'steal' a breakfast the next morning in case he got into trouble with the hotel or his company, I was off to ride the Dingle Peninsular.
I had been half way around the Dingle peninsular years ago and had to cut it short due to time limitations, so I was wanting this a lot, to see what I had missed. It was a hard ride out west into that strong wind which had been blowing in from the Atlantic for days now and soon I had to follow the road from the North side of the Peninsular and across the pass to the south side, which was covered in low cloud. It was a big climb in a short distance and soon I was in the fog that lingered over the tops. Down and out of it, the weather turned a bit brighter again and then I was through Dingle and out to the tip of the peninsular.

I have been round the ring of Kerry before yet this was completely different and with the weather it had a uniqueness about it. 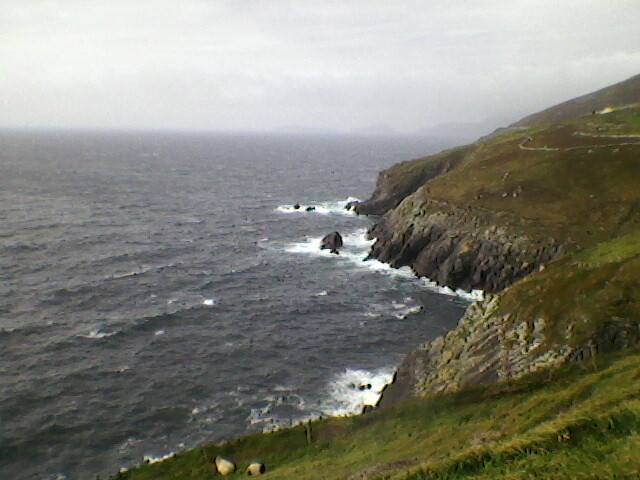 I returned back to Dingle and to head back to the bottom of
Dingle Bay to do the Ring of Kerry, but not without taking some dramatic pictures of the clouds coming over the bay from that peninsular.
As mentioned the bike was problematic with it's firing and I decided to have a look at it before heading west again. I looked at everything and it seemed fine but when it came to restarting, Nothing. Nada.
A mechanic at the garage went home to get me a pulley for the magneto hoping it was the problem I had back in Dublin. No. Everything looked good and after starting to get desparate I closed the gap on the plug to near touching and suddenly it was back running again. The mechanic couldn't believe his eyes as I rode off after two hours of torment. 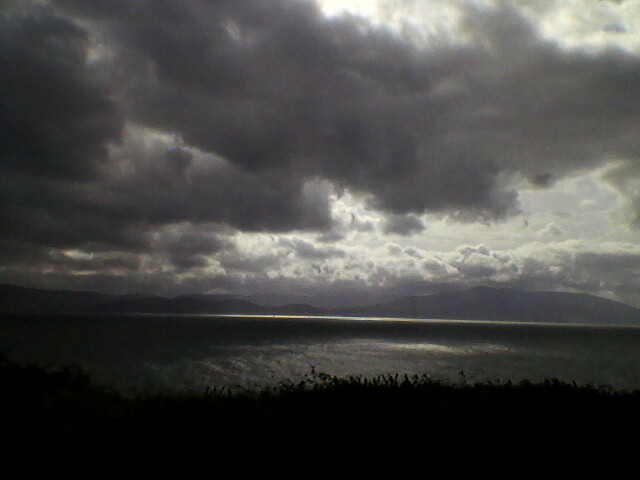 Unfortunately that two hours delay left me with the next weather front comiing in before I could progress very far. The mechanic had told me that there was a Harley meet somewhere on the peninsular and I hoped to find it and do some recruiting. However I only got going and the rain came sheeting down and soaked me right through. I was approaching Kells and because of the rain it was almost black, when I noticed a cafe gift shop with a covered customer area at the back and apparently deserted. I was straight in, under cover and stripped of all my wet gear before I started to feel the cold. 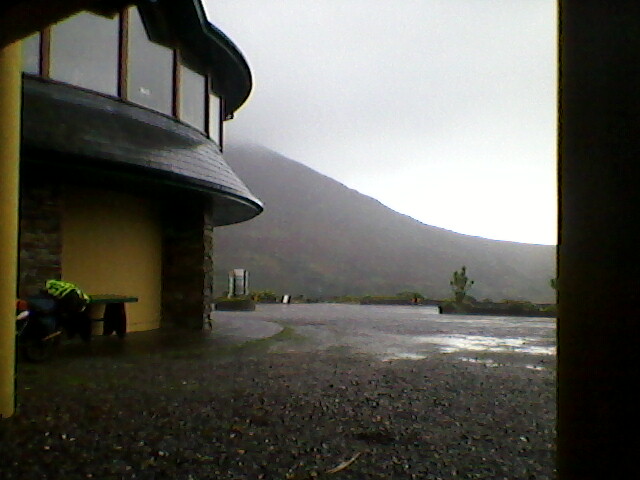 I sat there watchin all the Harleys riding past drenched and waited till darkness before getting to sleep on the pic-nic table under the canopy there.
It looked like there was a house behind the gates at the back but there were no lights so I thought I was mistaken, until Icoughed and a dog started barking. I lay still and eventually the dog fell quiet and so I slept, until I woke early in need of the toilet. I rolled a cigarette and the rustle of the paper started the dog off again. Another period of stillnes while I smoked my cigarette before grabbing the last couple of hours sleep.
I woke fortunately just before a delivery van arrived and I was packed and ready to go. I rode around the front of the building to realise the shop was open and there were petrol pumps. I filled up and went to the shop only to be quized by the old lady serving. I confessed to sleeping round the back and apparently it was her dog barking and had woken her. I told her the story of the ride and she treated me to a cup of coffee, bless her.
I rounded the tip of Kerry in lovely sunshine and headed to Sneam for the worst cup of coffee I have ever had, then headed for the Beare peninsular. 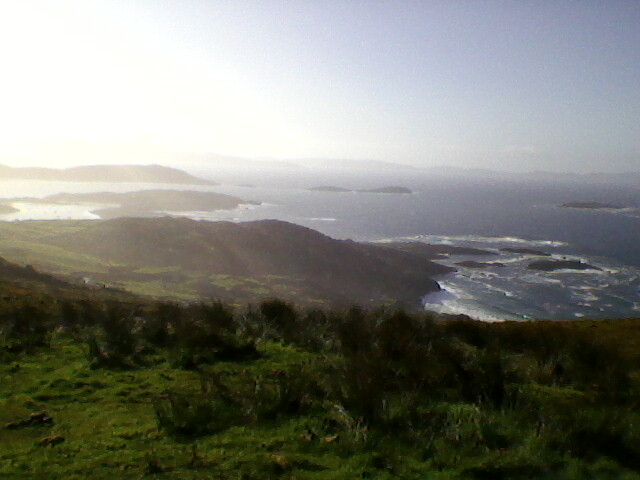 The most amazing thing about all the peninulars is their uniqueness. Beare was unique and also special. It was probably the least inhabited and had a wilderness feel to it. The scenery changed at every turn in the road and houses were rare. The coast line was astonishing and I felt I needed 4 cameras to be sure of getting all the picures without dead batteries or full memory cards. 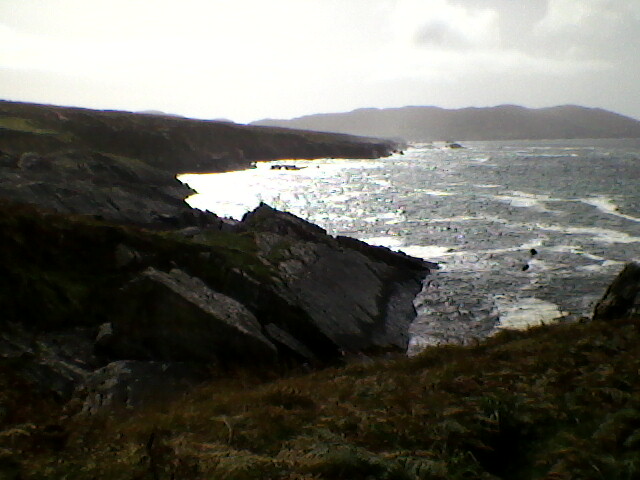 There was one final peninsular at the southwest corner. The Irish Lands end so to speak and it didn't take me long to get there. A completely different landscape that brought me down to Crookhaven and a tranquil inlet before the very sout west tip of Ireland. 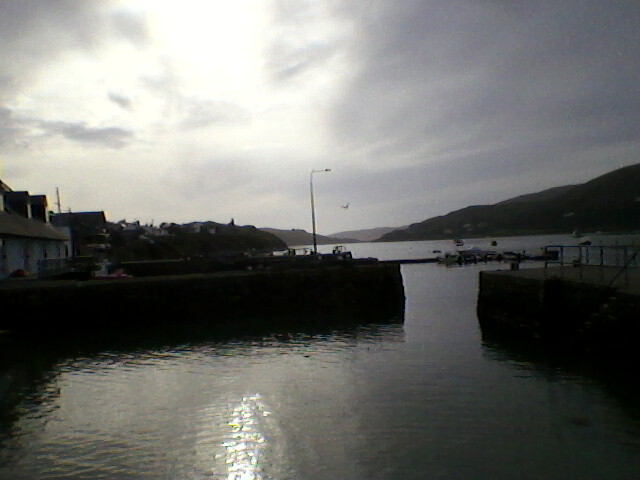 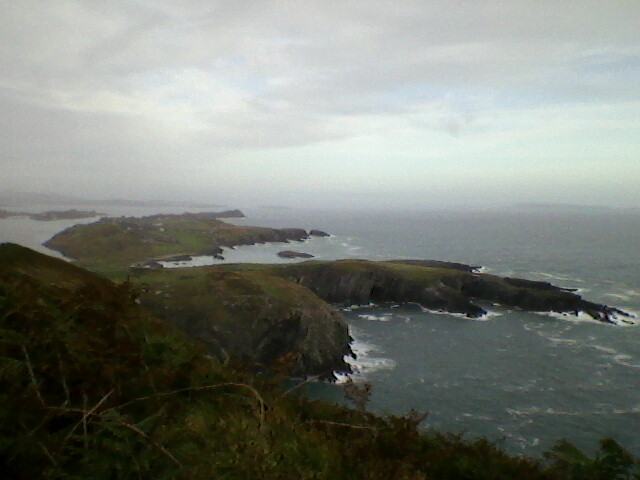 A couple of pints and I was off to reach Skibbareen before dark.
Five Fingers.
I actually felt I had achieved as much these last couple of days