Milano to Viareggio (and the toothless sprocket)

﻿﻿After two weeks of trying to make sense of my bank statements, I booked a flight back out to Pisa for a grand total of thirteen pound. I was really pleased till I realised I had mistyped my name and it would cost a hundred to alter it. I searched again and found a flight from Stansted to Bologna for twenty six pound, which I figured was a better option. It was an early flight, but I was sure, I would have time to visit my niece in Surrey before heading off to Stansted.
It wasn't the case and to try and save some cash I decided to hitch hike down the day before. I am having a bad time hitching at the moment and things weren't going so well as I stood at a garage on the A1 for four hours, before accepting a lift over to the M1 and was dropped at Trowell services. No problems I thought, but the evening was setting in and traffic was dwindling.
It was nearly 11pm when a great guy call Michael offered to take me further down towards Northampton. I think he was a bit more worried than me about me missing the flight, as he suddenly announced he was going to drive me all the way to Stansted.

Michael was an Indian lad who was a star in electronic engineering and in spite of rescuing a company in the Northampton area was having to leave the country as his visa had expired. He was leaving within a couple of days and yet still had time to drive a couple of hundred miles out of his way to make sure I made a flight and keep the schedule on track.
My thanks to you Michael if you are reading and incidentally the micro card you gave me was blank.
Stansted is a great airport with a good Spar supermaket where you can get reasonably priced sandwiches and coffee.
I arrived at Bologna and as I wasn't due in Milan to collect my bike and gear from Ed until the evening, I decided to try and hitch. Again with no success.
I got a local bus into the centre that no one seemed to pay on, including myself and then a thirteen euro train to Milan. 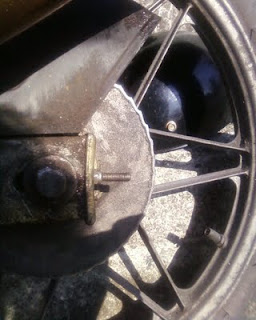 After collecting my gear off Ed, I decided to stay in the neighbourhood for a couple of beers and got chatting with a couple of great guys there, before crashing out in the covered courtyard of the church opposite Eds.
I woke next morning to find I was locked in the compound with my bike and was unable to leave until the priest came and unlocked the gates.
I set off for a gas station and immediately the chain started jumping the sprocket. I went to adjust the back wheel, only to find that the sprocket had no teeth for the chain to jump.
It was a shock and I was left wondering which of five options to take. These included staying in Milan and waiting for my spare sprocket to be delivered from England, to adjusting the tension on the chain so that it wouldn't slide around the sprocket.
I chose the latter and managed to ride gently off to La Spezia.
If ever I find any money, I am going to set up a road sign business in Italy and if the government ever get round to erecting any I will be first out the blocks and make a fortune.
It was a nightmare just finding the road out to Opera and worse still finding the mountain trail that would lead me straight to La Spezia. I eventually finished up in Pavia and had to work my way back to where I wanted to travel.
Even then I picked the wrong route and after climbing over a pass of four thousand feet or more came to a junction and made the wrong choice and finished up back on the milan and Genova road not much further south than Pavia, but it was still a nice ride none the less.
I arrived at dusk at a small town called Serravalle Scrivia and decided to settle there for the night.
I stopped at the station bar for a couple of beers and was alerted that a young guy was eyeing up my wallet when paying for a drink, by the bar girl. He went out for a cigarette so decided to tackle the situation by joining him for a chat.
He turned out a nice lad and was just coming home from work in Genoa, who had a bike himself and was just curious about me. I slept in the waiting room and was woken on three or four occasions by fast moving freight trains blasting their way through the cold Italian night.
Coffees as usual in the morning and then I set off in glorious sunshine into the same hills I had traversed two weeks earlier. The bike made it down to Genoa where it eventually lost all traction . 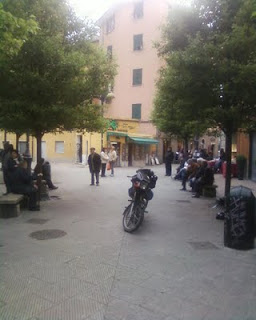 I pulled in and decided to turn the sprocket around and catch the few remaining ridges that were angled in the opposite direction to the wheel rotation. It worked for two miles until I stalled the bike and found I had no traction to push start it.
A bit like trying to get an automatic started by pushing it. There was only one answer and that was to take the sprocket off and file some ridges in it. I was so desperate to reach the coast and find a place to tackle the job properly, or find a sprocket somewhere. Where I stopped, was a working class area in Genoa and in the middle of a seated area where everyone was out chatting and kids playing. A highly unusual place to start repairs, but I set about filing the sprocket there nonetheless. If ever you are lonely in a foreign country, I suggest buying a clapped out bike and fixing it in the city square. Everyone wants to chat about the problem and what you are doing there. This was no different and I still managed to communicate even though I had no grasp at that time of Italian. After a while an old guy fetched me a round file which made greater inroads than the one I had and I found another local who spoke German who directed me to the ATM and the supermarket.
Once I had made enough indents to the surface of the sprocket I pushed it into life and was off to La Spezia.
I was having to accelerate painfully slow, as I didn't want to strip the notches I had just made.
The Riviera coast line is really pretty, though busy and it was slow travelling, but eventually I reached Rappallo.
I had no sooner pulled up when the polizia locale pulled up on a motor scooter to tell me my helmet was illegal..
Really said I and all he could say was "well I have told you anyway, goodbye."
I slept in the waiting room of the station with a couple of other guys who had obviously missed their last train home and was off first thing to Sestri Levante for a couple of coffees and a phone battery recharge at the marina edge looking back at Genova. 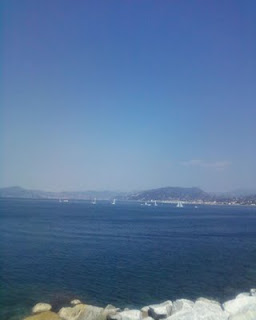 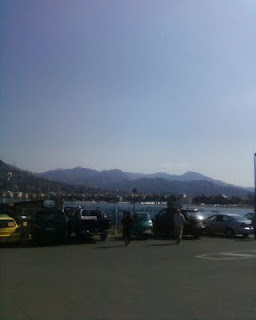 I deviated from the coast after that and found myself climbing two thousand feet over the paso Giovi still with no teeth on the sprocket. How it was surviving I have no idea as it was defying all laws of mechanics.
On the climb up I had a chance to look back over the hills and valleys that I should have travelled on the way down, and they were awesome views.

At the top of the pass I was confronted by bikers cafe and meeting point. I parked alongside all the posing machines while they strutted their stuff, totally ignoring the feat my little bike had managed. Half of the bikes looked like they'd never been out the garage, apart from a few rough and ready riders that rode up with some antique bikes.

I smoked a couple of fags and then set off on the downward ride to La Spezia. And it was wonderful and was as good a ride as riding a big machine, as I flipped it from one side to the other on the chicaine bends.
At last I reached La Spezia and settled on a beer at the Marina which was the cheapest I'd encountered so far at
two euros for a large Moretti. I was tired and it was hot away from the matina, as I crossed the road to a small park square and laid out on a bench for an hours sleep in the sun.
I woke groggy from the sun but I got going again before I spent all of my money on Morettis in the bar.
The wonder of the hills gave way to the tedium of straight road, running the length of the beach resorts south of La Specia, so, when I arrived in Viareggio I was more than ready to stop the night. It was a Sunday and there were still people coming back from the beach and heading home in their cars and heading on foot to the station where I decided to linger for a nights rest and have another look at the sprocket the next day.