Bezier to Monaco - Interrogated by the Monaco Police .

As mentioned previously I spent the night at Beziers waiting for the cash machine to kick start my ride.
After spending a week with no cash in Canet I started to believe I could will things to happen, like finding a fifty euro note in the gutter, though it was usually just a short tab end Pierre had tossed before going into the bar.

I'm not in any way religious when it comes to belief in God but I started to pray that if there was some great organiser of the universe, he would organise something for me, to get me by. After all I was one of the good guys and deserved a bit of help for the deeds I was doing.
So while I was standing by this cash machine in Bezier, along came two young well dressed men with short hairstyles, who stopped and spoke to me in French.
"Je ne parle Francaise" uttered I, "mais vous etes Mormons no?"
yes came the reply and you speak English.
They were as relieved as I was that they had found somebody competent in the mother tongue to speak to.

We chatted and I even had them laughing at my tale of woe and upon hearing that I had not eaten for a couple of days, offered to rush home and sort some food for me.
Don't go away they said.
Oh I'll still be here  I reassured them.
It might take us a half hour, is that OK?
I won't die of starvation in that time I said and off they ran.
A half hour later they returned with apricot jam sandwiches and some salted seeds and a tangerine that seems to be on the fare of all donations. I hated getting them in my xmas stocking, but I was so grateful for anything at this time.

I set about refuelling and invited them to tell me about the Mormon church. It didn't take long, and I promised that I would send for the book of Mormon when I returned home and read it with an open heart and an open mind, which I will do. I wasn't patronising them, as I always believe in listening to a story before forming an opinion.
I managed to tell them the salesmans joke of the bible seller with a stutter who won awards.
His secret was
I knnnoock ock onnn a doo door and ask them
Do yoooo you wannn na buy a bbbi bible or shhhall shall I rre  read it to you.
That had them hysterical as they had been all day flogging themselves around an Islamic neighbourhood..

Well god does move in mysterious ways and my prayers were answered by these two great lads. who had been thrust into France with no language a year ago on their first mission.
﻿
<><>
<> 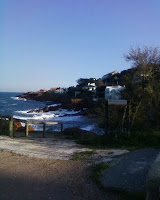 The first thing after coffee in the morning was to get fuel and get underway. I raced through to Montpellier stopping for a coffee at the port in Sete and then onto Marseille. The landscape was incredibly boring, flat and although sunny, the wind was still biting and driving in from the North. By evening I was approaching Marseille. I had done well to get close before darkness and again I was confronted by the motorway with no signs for a back road and no map to consult,
I pulled into a small town north of Marseilles called Vitrolle and tried to find a road in from there. While doing pirhouettes around a couple of roundabouts near the motorway, I managed to cause a shunt between two waiting cars at a roundabout.
It wasn't till lap two of the roundabout, looking for a roadsign, that I noticed the drivers exchanging words and inspecting the damage that occurred at the time I heard a bang on the first lap.
I raced off in case I was called to account , but finished up back at the scene with the two drivers still exchanging words.
Buggar this I thought, I will settle for Vitrolle for the night and find Marseille in the morning.
I located the centre and it was a modern urban town, but the square at it's heart had a couple of bars in it.
I chose the right one and had an amazing evening with the locals there and a lovely woman who was running the bar.
It was my first alcohol for a week and I didn't care as to it's affects on me.
One of the locals was concerned about me sleeping rough and offered me twenty euros to book a hotel.
I declined and at the end of the evening found a very quiet space a hundred yards from the bar where I could return to get my morning coffee at 6.30 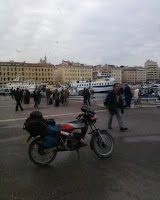 There was a guy on the morning shift who I think was the womans husband from the night before. He was very impressed with my voyage and after getting help from a couple of locals for directions, in a pot pourrie of languages I set sail for Marseille.

I was doing well until I found a missing link in the list of directions, but a kind skip driver led me out onto the road to Marseille and I duly arrived at the marina/port.
I was amazed to see a harbour so central to a town and took a couple of photos with a couple of cigarettes.
Trying to escape was a nightmare with the traffic and the hills at the back of Marseille but having negotiated a way out to the coast and being suitably impressed with the coast line I managed to find myself in the hills beyond. It was a blind alley and if I had of had a map I would have missed a wonderfull view of Callanque de Sormiou nestled at the foot of the hills on the sea side and Marseille on the other side of the ridge. 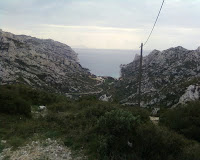 At last I found the road out and was over the heights beyond and then down to La Ciaotat, where I stopped for coffee at a quiet backwater cafe that was just opening. I was attracted by the Yamaha 175 outside which belonged to the owner who had a slight disability which I imagined was due to falling off a bike at some stage.
I had a couple of coffees the second he laced with schnapps for me and after offering to buy his bike if ever he wanted to sell I was off to Monaco. 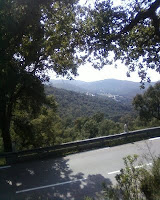 I missed the coast road when I followed a San Tropez sign which in a way was quite pleasing as it took me over a range of hills that was a delight to ride except for the french drivers who were intent on knee-capping me on every bend.
I rode down to San Tropez and negotiated a vehicle check two mile prior when I was advised that my helmet was no authoriszay en France. You understand No auhoriezay, said the officious officer.

I was about to pull a knapkin out of my pocket to wipe my nose but decided against the action in case it wasn't and authoriisay nose wipe for France.
I flew towards Toulon Cannes and Nice along a lovely stretch of road until I neared Nice. The rocks were a red sandstone and the sun shining on them reminded me of home and the Anglican cathedral. 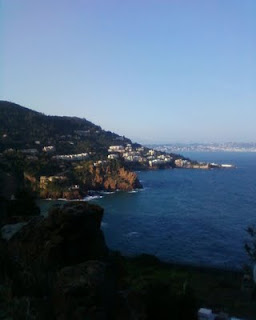 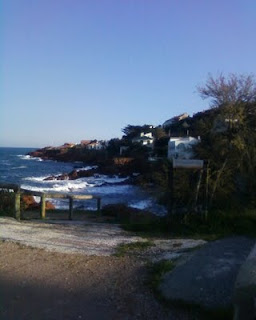 Nice was nice and after another quick stop to adjust the tension of the chain I was off to Monaco.

The climb out was stunning as you pass over mountainous headlands with the most majestic panaoramas even in the low light of dusk.
I quickly descended to Monaco to face another one of those moments that make for an interesting experience.
It was dark when I dropped into Monaco and in spite of having cash I still hadn't eaten that much.
So after touring the streets which are terraced up the cliff face, I pulled up at a scooter rank to go and find a shop and a bar.

I climbed three or four levels up and eventually found an asian grocery. I bought a tin of sardines that unfortunately had no pull tab so on returning to my bike I sat on the kerb and opened the tin with a screw driver from my tool kit. I only managed to open half the top so had to lie on my back and suck the sardines out singly with the tomato sauce until empty.
My back was in rebellion to the position I had been using so I crawled my way across the road to sit on some steps to an office while enjoying a cigarrette.

A car drew up after 5 minutes sitting there and out piled four burly Monaco police officers and started walking towards me.
As usual I stood to greet them and be courteous when the questions started coming at me fast and furious. I will continue as a dialogue.
Bon Jour
je ne parle fr...
You are english?
yes
Why are you here?
I am travelling
What hotel are you staying?
I don't have one
why don't you have a hotel here:?
Because I am travelling through
Are you on the train?
No moto
A bus?
No a moto, over ther (pointing)
What are you doing in your pocket, let me see what you have there?
My phone
(I went to get my lighter)
keep your hand out of your pocket!
I just want to light my cigarette
You wait till the interview is finished!
Pardon (I walked towards him as I couldn't hear him that well)?
You stand back sir, against the wall.
But I can't hear what you are saying
You stay there sir.
So why do you stop here?
(thinks - God only fuckin knows)
Cos I am tired and hungry
So why you stop here?
Pardon ?(I lean foward at an angle of 45  degrees)
Have you been in trouble with the Monaco Police before?
(thinks- Am I in trouble now?)
No
Papers,(After radio with HQ) what is your Fathers name ?
George
Your mothers name?
Irene
Her first name?
Irene
(scowl) Before her marrage?
Kohla
Ok you go
(second cop walking by my bike)
Come here
First cop no- you come
What is this?
A screw driver
You have problems with your bike?

Always but not tonight
Why do you have your screwdriver on the road.?
(reaching to pick sardine tin up from gutter)
To open this
So you open other bikes boxes ?
No just my sardines
What have you in your bag?
Just my things(opening bag)
My dirty underpants and clothes (one by one)
A towel

And this pocket?
I have my phone charger

(Four officers getting in their car)
and in this pocket
(shouting to the departing car)
at March 17, 2011

Can't wait for the book. Wish I could join you Harry...