I hung around in the morning to buy some tobacco and change currency. After changing my currency and having a warm breakfast I set off in the pouring rain. The route was tedious running the Autovia that runs next to the resorts along this stretch of the Med. Then came the problem. I couldn´t get through the gears at all just as I was approaching Estopona. I crawled in in first gear and came to a stop in the middle of an Industrial estate. I saw a moto shop so pushed it up to there in case there was anything I could buy that would solve the problem. I started to strip the covers off to see if there was a problem with the mechanism. In the pouring rain and trying not to spill oil on the road I was having a real struggle
.

It was then that Maria Angeles and her brother Alberto came out to go for lunch. They came and spoke to me abouty the problem and they and I were convinced it was internal and nothing that we could do.
I noticed a British run body repairs and asked them if there was anywhere in the area I could store the bike as I feared I was at the end of th road as regards the ride and they agreed to store it for a month.
I went back to the bike to replace the bits and decided to have one more look. This old guy appeared from nowhere and started to ask questions. I couldn´t understand his dialect very well, but suddenly started gathering up all my stuff and transported the bike my gear and me into the workshop, where he started inspecting the mechanism. This manm turnedm out to be Maria and Albertos retired father Francisco. He agreed it was internal and then suggested we remove the engine and strip it down. If you aren´t familiar with mechanics you wont know how big a job this is.
Meanwhile Maria Angeles had brought some food for a sandwich and tried to convince me if it wasnt eaten it would go to the animals. She was so good, mechanically too and knew more about the individual components of the gearbox than myself
After 7 hours of cleaning the gearbox of a whole lot of debris, the bike was reassembled and ready for the road again. Including new oil and a top up of break fluid.
It was late and perhaps I didnt insist hard enough, but they refused any offer I made to recompense them.
I will do what I can when the ride is over, because, if it wasn´t for them I would be flying home mission failed.
I left them in the dark and headed for the centre where I enjoyed a couple of beers before getting soaked again in a leaky shelter. The following morning I was having my coffee and tosta in the cafe opposite and was telling the bar owner my story and apparently the lived only round the corner

Setting off from Estepona the rain started again, but fortunately not for long and then only a few showers.
The road was the Mediterranean highway and was by and large uninteresting, so I decided to try and find a route through the hills at the back of it. Unfortunately each lane I tried took me up a blind ally which was usually a mud slip with the previous days rain and made staying upright precarious as my back wheel kept giving way. The other amusing bit about these lanes was they highlighted a problem that had followed me throughout the ride. The dogs. The Spanish have a thing about keeping dogs but usually they are kept outside. Everywhere I stopped a dog nearby would start barking and so it went, the whole route, me kickstarting a chain reaction of howling, yapping and barking dogs all pleased to have fulfilled their function. It was no different if I was broken down and pushing the bike. Just the mere presence of a moped/scooter would have them dashing back and forth inside their pens as I tried to tip toe past without disturbing them.

Anyway back to the day. I returned back, disappointed, to the Autovia and passed through Malaga and was delighted to find the beach road that ran, yes right next to the shore line. It was a long straight and flat road that was inter-spersed by the odd roundabout but seemed to run forever. It wasn´t till I left Nierja and the darkness fell that I got the big surprise.
I was suddenly running along the heights of the headland. A twisting winding road that rose and fell and passed through tunnels in the rock as it oused out into the sea, nestling quiet resorts in the inlets below.

I decided to run down to one as it was getting a bit scary on this top road in the darkness. I fell into one resort came out the other side and was totally disoriented as I climbed out, twisted and turned in the darkness only to be looking back where I had been and over the ridge where I couldn't get to.
I risked another sprint up above and eventually dropped down to Almunecar.
I seem to have a nose for the cheapest bar, and if it's empty it will be cheap, and tonight was no different, but first I needed to do a quick scout of the area to find a place to sleep.
Once deciding there were plenty of fresh air hostels, I was back to the bar for quite a few more,  for less than a fiver and then off to my quiet little hideaway near the beach.

I picked wrong as I was woken at 1am by the police who had spotted my illegal number plate and subsequently found me behind a parapet of a closed bar. The cop was really nice and we chatted about the ride as his mate checked my passport over the radio. Relieved that I was staying no longer than a night, they wished me goodnight and left me to it.


The following day I climbed back up to the´high´way and off in the direction of Almeria. It was really strange as I came over the last hill and was confronted by the reflection of the sun on thousands of plastic greenhouses. It was difficult to differentiate the sea form the plastic as the light reflected off both.
It was tomatoe growing land and I am sure in the midst of all that was some illegal vegetation being grown.

I stopped at Roquetas de Mar for a liquid lunch and then off to Almeria. I was hoping to reach Aguilas before night but there was a headland, Cabo Gata I wanted to run around first. It was a good ride up there but the road that I thought ran around to San Jose was only a walkers route. 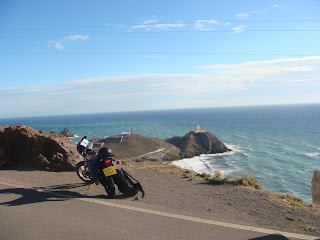 I thought I would be clever and ride what I thought was the path and set off over debris while dodging bolders that had come down from the hillside. It was like a Jeremy Clarkson challenge and I was regretting the attempt as I looked down the sheer drop on my left and dodged the calamities that lay in wait for me. Eventually the path petered out and I had to return bottoming out my forks and wearing out the clutch as I revved the fuck out of the bike.

Back to the road covered in sweat and with my tail between my legs, by the way I had come in.


There is a national park after San Jose and there was no indication on my map of a road across so decided to head up to Nijar and over the tops. I missed the road I wanted and finished up down by San Jose that I had avoided two hours ago.
Fortunately the boys from the black stuff were out and I got directions for a route through. It was getting dark and I was sure the road was a false dead end as there was no traffic, just a wilderness. But true to the guys word I suddenly came over headlands, past lighthouses and arrived by an enormous factory next to the town of Carboneras. I am sure they make Carbon there but that´s a guess.

The town centre was not one I liked that much, so I returned to the first bar that I saw while coming into town and had a good night there with a lovely lad who was family and kept the bar going till 11.30 even though he was opening up at 6 in the morning for the workers.
I left, but as I couldn´t find a decent hide hole I decided to just kip in the road between two delivery vans.
Up at 6am and back to the bar to see my mate for an early breakfast