I left Carboneras after having breakfast at the best bar there, just as the sun was rising.

I was totally unprepared for what was ahead.

The headlands were golden in the early morning sunlight and seemed to present themselves as a barrier to any fast progress.

As soon as I left the town I was confronted by an enormous climb that actually turned back on itself to wind it´s way round a pointed hill which acted as a stepping stone to the top of the climb.
It was breathtaking getting up there and the road continued in the same vein.
This was big dipper bikers land.
The most scary bit was seeing that the road was supported on these concrete posts that seemed to just sit on the rock face and the road was just a concrete raft sitting on them. 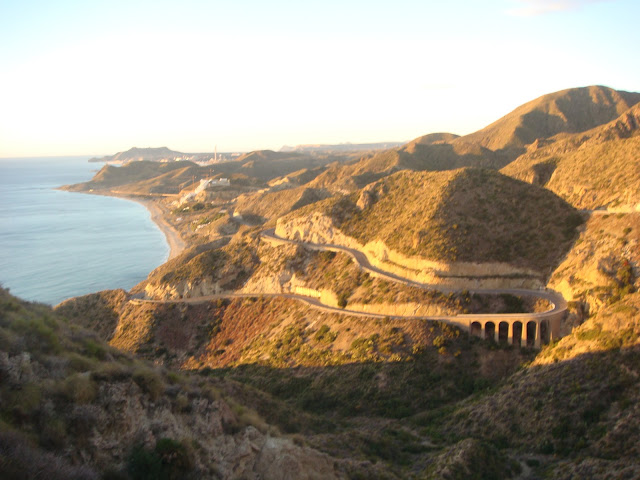 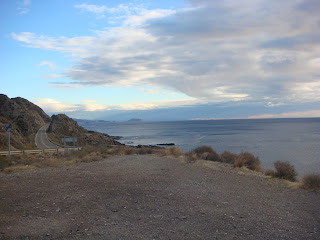 It continued this way until it settled into a more gentle rolling coastline with no beaches, just the gentle cliffs and the curves in the road that made riding a joy.

It went for miles and all the while the headland of Cartagena was acting as a magnet.

The first point of call was Aguilas where I had hoped to reach the previous evening and I was so relieved I didn´t miss all this in the darkness at the end of the day.

The weather was turning colder with a sharp Northerly wind that came over the top of the hillside to my left and with my old donated basin helmet I had no relief from it.
I reached Aguilas comfortably and went for a warming cup of coffee and sat in the sun outside just to feel the warmth again.
The map showed no coastal route for mopeds so I headed out for Lorca and to pick up the N332 that would bring me into Cartagena.
The road out was a gradual incline and against the wind I was barely moving, but eventually I reached the turn off to pass along another deserted stretch of winding road that took me the 30 odd kilometers to Cartagena. 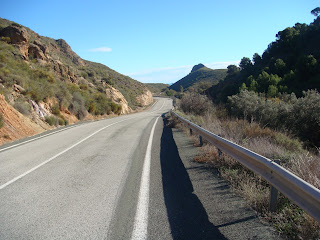 Even when I thought I had bottomed out 12 kms away it took another steep climb to pass the hills that blocked the coastal approach in for me.

I had been here once before and had difficulty finding the old town and gave up and this occasion was no different as I probed with the moped untill deciding that a night in a hostel in Alicante would be a better option.
The route from Cartagena to Alicante is really quite boring so I won´t give any detail of the ride in except, that it was a welcome relief to get there and remove all my soaked clothes and hang them out.

I like Alicante having stopped there the odd nights on route somewhere else, but the Guinness at €5 turned me off.
The heating in the hostel was no big shakes either and I decided the best way to dry clothes was to wear them so I spent an hour changing various items and walking around to speed up the process.
There was nowhere to securely park the bike either as I had my lock confiscated at the airport, so I decided to park it near the window where there was free internet access and stay up as late as possible to keep an eye on it. I lasted till three in the morning before tirednes resulted in a loss of vision and I couldn´t differentiate one letter from another on the keyboard.

I slept, almost till after check out and was rushed to pack everything and get out before the 11 deadline.
I made the decision to bypass the coast at Benidorm and head up to the hills and a direct route to Valencia.

The route I was taking, I had christened Bikers Alley, as I drove up there one Sunday a few years back and it´s just a race track for every biker in the area to test their courage and wreck there bikes.


The Good The Bad and The Fantastic
The Good﻿

Today was going to be unbelievable for two events that came as a complete surprise.
I had decided to ride cross country to Valencia to miss the Benidorm coast line which I had travelled before and wished to avoid. 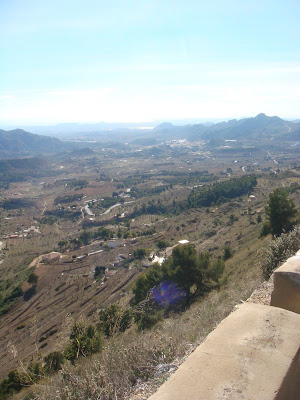 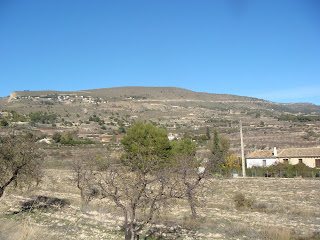 I had decided to travel across the Port de la Carasqueta, which at 1024 metres makes it higher than Mount Snowden in North Wales. I rose to this height with the bike from sea level which I think makes it the highest ascent the bike has made.
The views over Alicante where beautiful in the wintry sun of the Mediterranean.
﻿

I continued weaving a path at the side of the Autovia until I came across a small village called Pobla Llarga. It was in the middle of the orange growing area and at first sight was a rural village that was closed for the Saturday afternoon.
I fancied a beer so pulled in at the only bar that appeared open. The bar was the Café Lynx which was run by José Navarro Pérez, who was a big Sinatra fan. He had Sinatra playing as I entered and we got chatting about his singing, but I realised he was about to close at four so I squeezed one more beer in before he shut the doors.
Then entered Paco who immediately started to sing along with Frank and was very good. A couple of more locals entered and Paco exited to return with some backing music for Tom Jones and......some opera songs.
He began a piece of opera which I began to record, but to my disappointment the memory ran out on the camera. All I could do was just listen with tears welling, at how beautiful it was sung. José then joined me on my side of the bar and we sang backing vocals to Paco as he delivered Tom Jones Fall in Love. It was one of those wonderful moments.

I have only just noticed that these videos have got lost somewhere in the great void of google.
I have though found another copy of Paco on my facebook wall
To view click here

Paco continued afterwards with a fantastic dramatic piece I don't know the name of, until I finally cleared enough memory to record him singing Carmen.

Paco sings Carmen
Pepe the owner of the building had joined us and stood a round of drinks up for everyone before I eventually left with the most wonderful afternoons memories of the ride by far. The whole gang were wonderful and I will mention them all by name., Pepe, Paco, Torrentí, Salva, Ramón, Pepe Mano, y José. The whole couple of hours gave me so much joy,

I was riding on cloud nine until I was brought to down to earth in one of the small towns entering the Valencia area. I stumbled into a bar for directions in a small town that I can't even remember the name of.
The bar was virtually empty and all I wanted was directions so I stayed by the bar as I took a beer and asked the barman for directions.
He wanted to send me back the way I had come in which was over a level crossing at the edge of the town. I knew that there was no other way out once across the rail line so I was confused as to what he was trying to tell me.
Two guys were sitting at a table and looked the most unlikely of bedfellows, one a young man, well dressed and fresh looking and the other a shady looking character which means nothing in these neck of the woods.

The shady guy was insistent on helping me but was actually telling me nothing except to calm down and was insistent on me joining them for a beer. I eventually decided to calm him down and joined them. He ordered me a beer just as the young man picked up his laptop and left leaving just the two of us. There was a gameof football on the radio and my companion appeared to be straining to listen so I studied my map in the meantime. He then rose swung his bag over his shoulder and offered to take me to the station. I went to the door with him and showed him that I was on a moto and didn't want the train, so off he went. No sooner had I sat down than the barman kindly mentioned that my friend had left with my bag and without paying for the beers.
I raced out and although it was quiet on the street there was absolutely no sign of him at all. I returned to the bar payed for the two beers I had had and jumped on the bike riding around the streets, in a hope he had discarded my clothes and sleeping bag and had just taken my tobacco and glass tankard I had been given by Sergio in Faro. No such luck and I even tried the police to see if anyone had handed it in, or reported it found.
I was upset and stopped for another beer and played my operatic videos off my camera, so as to remember the good part of the day and not allow this incident to spoil my day.
I left eventually when I had recieved no call from the police and managed to get to Albal via the autovia and settled down for a cold night on the tiles in just what I was wearing.

Two stretches of sleep amounting to four hours was all I managed as I woke freezing cold and need to walk around to recover the feeling in my feet. The streets were busy the whole night as the Spanish partied and fortunately that meant the bar was open at seven in the morning for coffee and cheese on toast before riding into Valencia.