And Now the End is Near

I conclude the story of the journey around India with the five day journey from Mumbai to Guria near Varanasi, a total of 1500 kms that would take me back to the project for who I am raising funds for. If you have enjoyed reading any of this journey and wish to thank me for my efforts in not only riding but writing and hours spent in cyber cafes uploading photos then please donate what you can at the just giving button on the right panel. Believe me it goes direct to the project and nothing from the project funds my rides, only their love and enthusiasm.

I spent nearly a week in Mumbai recovering, more so from the last three four days riding that had me cover only 500 kms in four solid days.While there I went off and did some arty photo work with a Peruvian friend Jano who kindly allowed me to use his very expensive camera. The weather started to cool especially the nights and I was surprised as normally it is fairly constant there, but on a cool Monday morning I set off heading North East. I entered Mumbai by the eastern expressway and had fears that I should not have been riding on it, so it was no surprise that I found two guards at it's entrance in South Mumbai and a large sign prohibiting two wheelers. However the old road out was very easy to navigate and it was only a couple of hours before I emerged from the sprawling mass of high rises that make up the greater area of Mumbai.

The roads were decent and the temperatures soon rose to a comfortable level for riding. I was surprised when I reached a mountain range somewhere in the region of Nashik. I say somewhere round as often as not the towns are not signed and everything becomes guess work. But it was highway three and the road climbed quite dramatically to a high plain behind it. 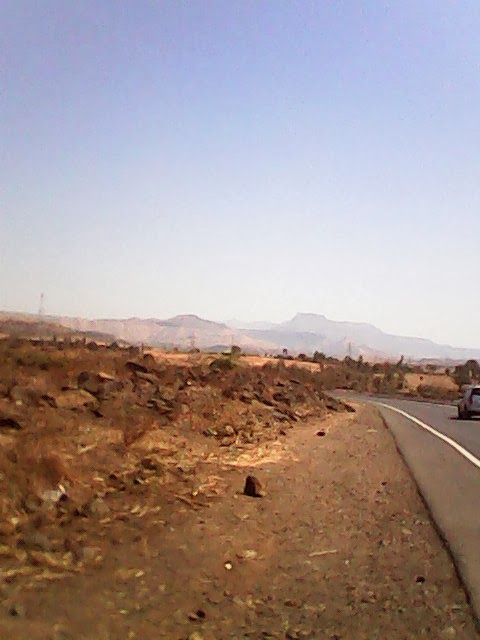 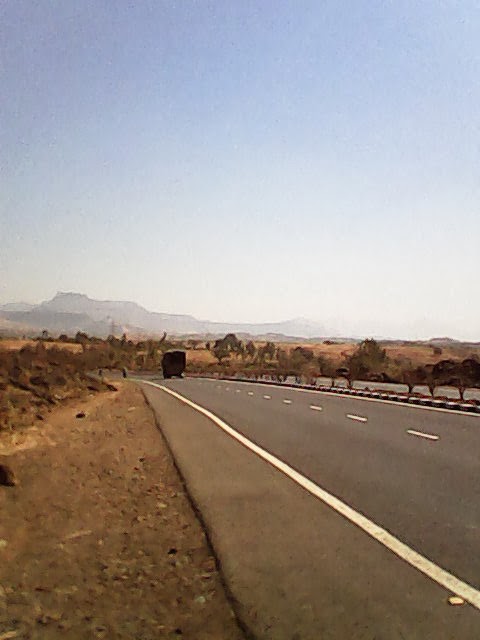 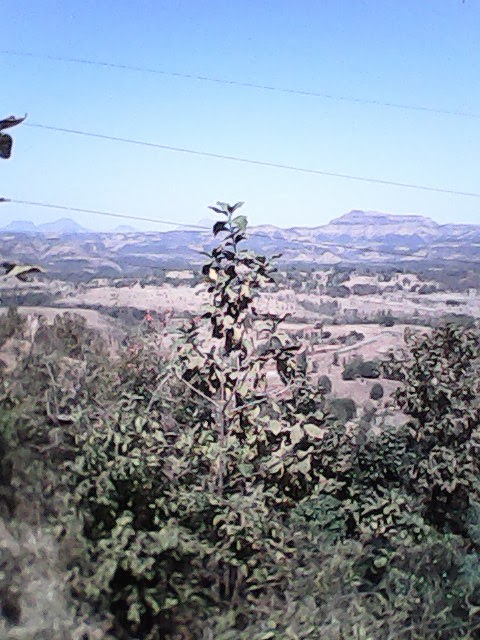 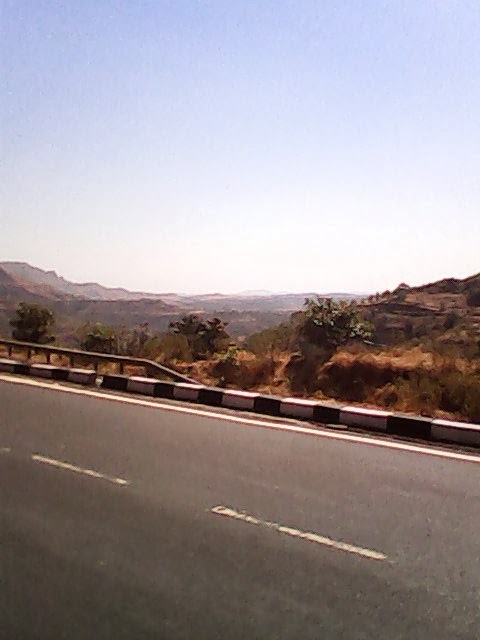 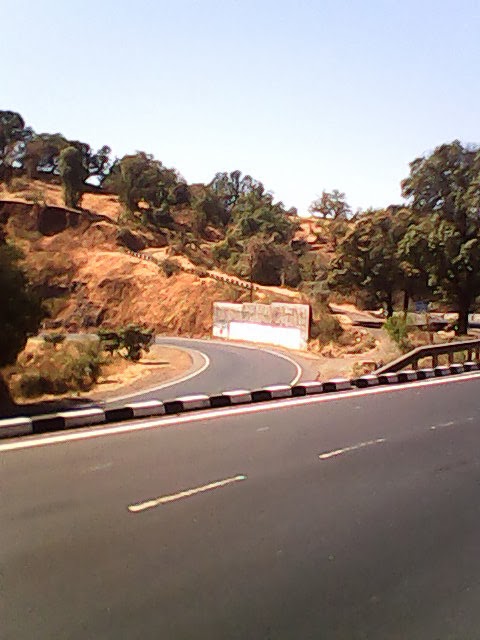 The temperature cooled quite a bit with just this relatively small climb. The highway as mentioned was in a good state and I rode further and was confronted by another range of hills that resembled Colorado in the States. It was really quite strange and not what I expected in this area at all. I was making my usual chai stops and even a restaurant stop and was greeted by locals and owners with an enthusiasm as only India gives to foreigners. 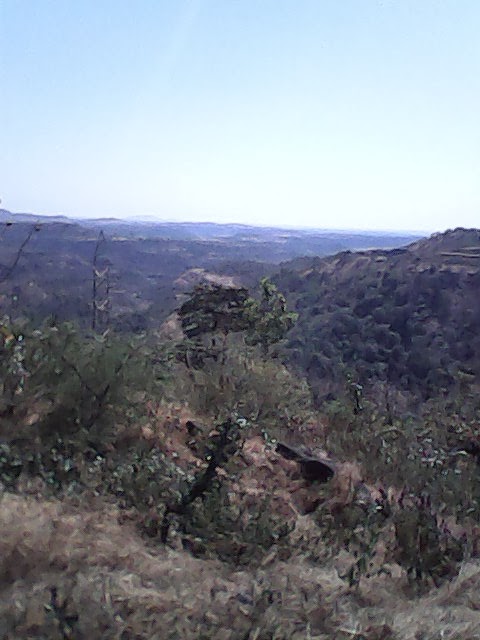 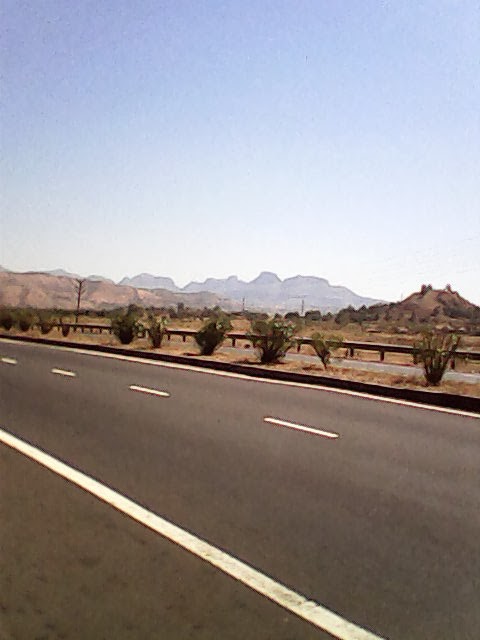 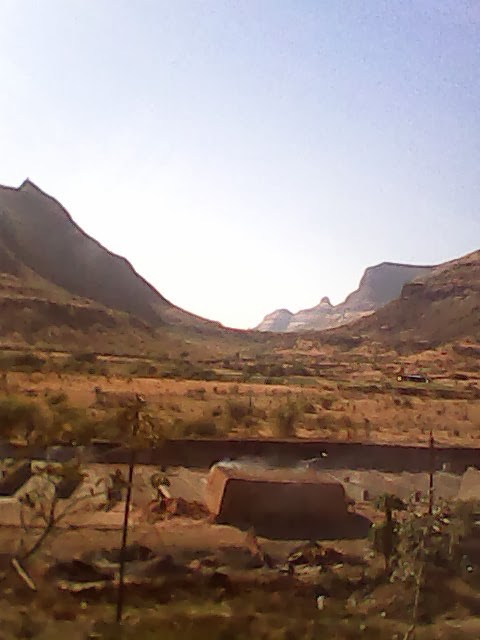 Climbing these hills you are presented by the heavy wagons, overheating with the slight effort, often with clutches burning and axles straining. Everywhere you go here there are wagons parked with wheels lifted and a little Indian pummeling the back end with a heavy lump hammer while extracting a broken back axle. In fact most of the goods carried on the back of a motorcycle seems to be a second hand back axle carried across the passengers legs as it makes it's way to the broken down casualty. At the steepest part of the ride, it resembles an ad hoc lorry park as wagons are going so slow in any lane that all you have to do is plot a route between them and beware of other riders who have chosen an alternative route and may appear from the other side of the wagon you are passing.

It was great riding but the late afternoon was cooling so I headed for the nearest city which turned out to be Duhle. I stopped for a tea and was again centre of attraction at the chai stall, but one small boy of 14 years who had spotted me in the traffic and followed me stopped and was able to interpret for all the questions coming my way in Hindi. He was invaluable also in getting directions to a lodge which I followed and settled in for the night. I went back into the town to look for an Internet cafe but was unable to find one with space, so decided to find a beer instead. I found a wine shop but the hotel was anti alcohol so decided against. I asked directions off a local guy who after directing me to a hotel where I could sit in the beer garden, proceeded after me to give me a lift there on his motorbike. He was Bhavesh a student of civil engineering and he joined me for a Sprite and a good conversation in town planning, and the differences in India and British systems, politics alcohol abuse and many more issues. We were joined at one point by one of his friends who seemed equally as friendly. His friend had taken the bike so he walked me back to my hotel.

The next morning I woke and was following direction from a friend of mine as I had no Internet to plot a route. It was cool and I had to stop a couple of times to allow the sun to get to work. I reached Indore after passing over more hills and watched as one of the many camel caravans passed by. I knew it was common in Rajhastan, but had no idea how close I was to the area. 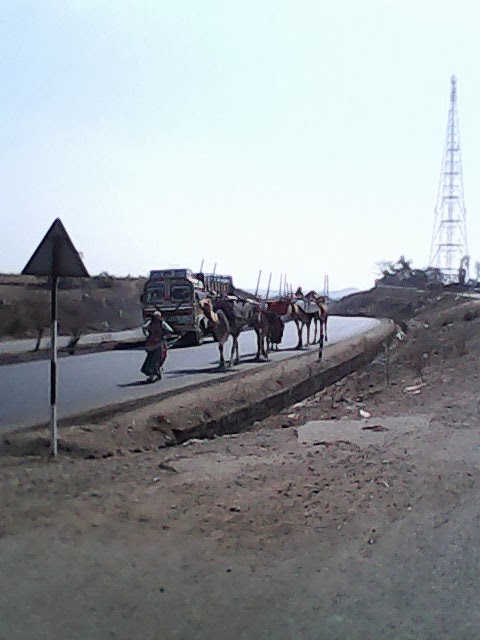 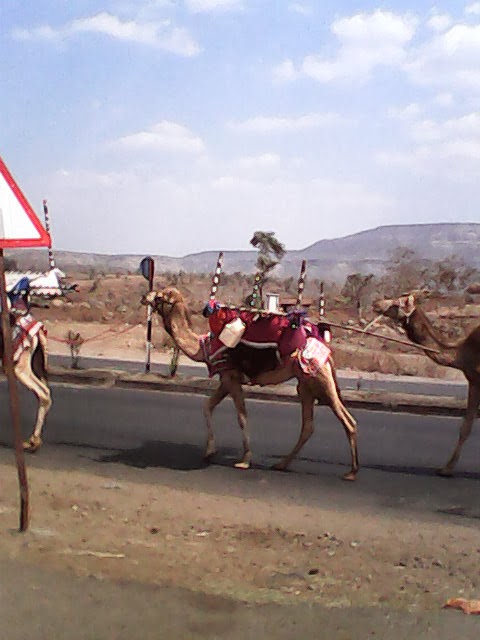 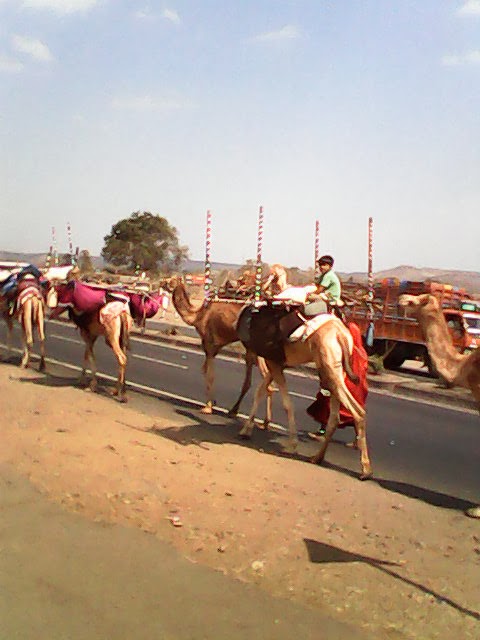 At Indhore I was tempted to continue to Agrar and see the Taj Mahal, but with my flight book for next week to see my daughter, I was a little scared of tempting fate and turn a successful trip into a nightmare with a breakdown in the later stages, so branched off the highway 3 towards Bhopal. Darkness and the cold prevented me from arriving in Bhopal and instead arrived in Sehore. Found a lodge and had a pleasant night although did not meet anybody for a converstion. I slept little due to continuous noise from the trin sirens and the air horns of passing wagons.

The temperature the following morning had dropped even more and I was on the road at nine. I must have made numerous stops to warm the bones, until I reached the biggest stop of the day at Sagar, as due to different time zones my route was delayed in reaching me. At least it was now warm and warm enough to enjoy a cool shandy. The route arrived before my shandy finished and I was off. Unfortunately the journey was then about to deteriorate. The next 30 kms of road had been removed and at first it was just about manageable, but soon I was left to negotiate approximately 20 kms of massive craters covering the whole width of the road.


It was free for all choosing a path with wagons and buses taking there own route across the terrain. The bouncing was bad enough but the dust and grime kicked up by the slowest moving vehicle was tiring to say the least. After three hours I arrived at the crest of a hill and there below in the dusk was a small village/town I believe to be Shahgarh. I was trying to locate a room when the local police man took over and directed me to a restaurant hotel. He insisted doing his duty before I checked in and searched my bag, which I thought strange, but maybe he needed to fulfill his role as keeper of the peace. I saw him on the road out the following morning as I negotiated more rough terrain. He stopped his truck as I bounced towards him and came over to check that I had had no problems.

The weather then turned and the first rain I have experienced in six weeks began. I pulled into Chhatapur and tried to buy a jacket mainly for the cold. Unfortunately there was nothing remotely my size so I left with my emergence bicycle cape over my bars and tucked under my backside. I flapped my way along to a little short of Kabrai and was left with a ten Kilometre ride in the pitch black to reach the town. I was so cold and miserable I draped my sleeping back around my shoulders and covered it with my cape to do that short stretch. I arrived aching with cold and so relieved to find a lodge and a bar for a rare treat of a couple of whiskeys to warm the bones.

On exiting Kabrai I tasted my first bit of trickery at the petrol pumps. I was warned to check the pump was set at zero and alwys did although to be fair all the attendants drew my attention to the display before starting. I asked for four hundred rupees and as he entered the nozzle to my tank and as I was about to check he threw his four fingers in front of my view as he started. I quickly looked to see it kicking off at about sixty seventy rupees. I told him to stop as it was not zero at which they couldn't understand the only number our two languages share. He continued and filled me 450's worth which I think was the start point. I paid him the four and all the attendants seem to have a good laugh amongst themselves as I rode off. I turned the corner and saw the fifth wagon in as many days lying on it's side on the muddy frontage of food stalls.

The rain was never far away but today I was faced with a strong easterly wind which was causing my cape no end of problems not to mention the resistance and instability on the steering. A quick alteration and I quickly bunched it around my shoulders and topped it with a dirty t-shirt. I encountered a couple of really heavy showers from which I took shelter from, before eventually arriving at Allahabad. This is the venue of the worlds biggest Mela. Last years Mela was the largest concentration of people ever recoded and was visible by satellite images. The site for it is on the river bed of the Ganges and as you cross the bridge the whole area as far as the eye can see in both directions is covered by tents, divided by roll out tracks and pontoon bridges. I raced on as I wished to see the kids back at the project before they finished school for the day, but was delayed by another heavy shower only ten kilometres away. I finally arrived as the children were walking and cycling along the Dehli Kolkatta highway on their way home to their villages. They spotted me as I rode past them and it was a joy to be welcomed back by so many smiling children. I entered the school gates to be met by the resident children and the staff.

Six weeks after departing here and after approximately six and a half thousand kilometres of hard riding across some ridiculous road surfaces, I am back. Four days time I leave by train to Kolkata and catch a flight to see my daughter in Australia, but I have been bitten , not by the mosquitos but by India and this nation of incredibly warm humorous and welcoming  people.
Thank you for reading 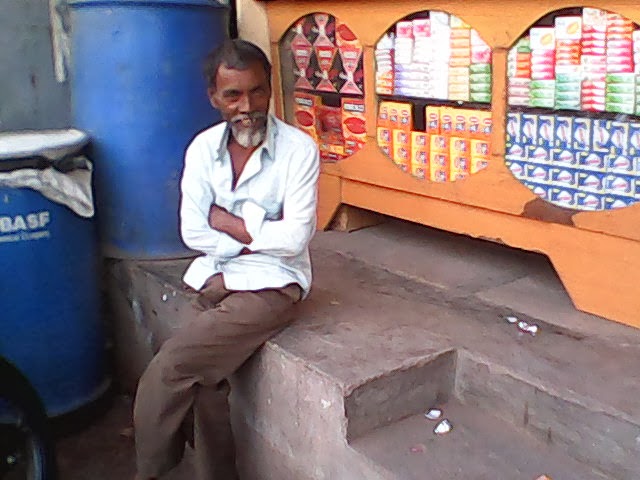 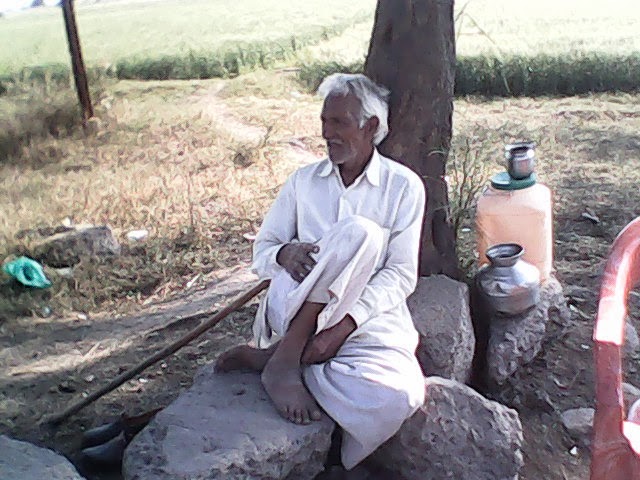 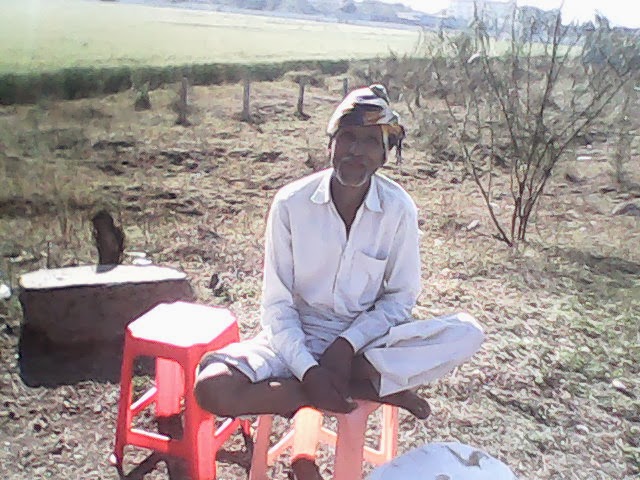 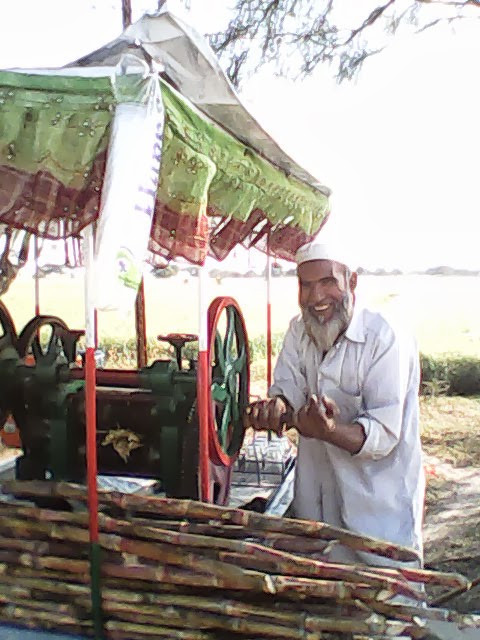 I will post my humorous view of India next but need time to work on that so stay tuned
at February 15, 2014