Its been an interesting, but painfully slow three weeks so far in Melbourne. The outcome of all this waiting is that I continue to meet the most fantastic people while sitting it out. From the lads at Melbourne Helenics Cricket club to the person who put $10 in my shoe while I was sleeping out in the park one night (donated now to the charity). If that wasn't enough then last night after pushing the bike 13kms to Moorabbin east for a roadworthy test and not getting an appointment at the nearby registration office till next week, I was at the start of pushing it back the 13 kms to St Kilda when Swanny pulled up in his truck and offered to garage it at his factory. Then to cap it off has offered to trailer the bike to the registration office on Tuesday. But to rewind the weeks

The first weeks here I have been struck by severe stomach problems. Having survived Dehli Belly I find myself in dire straits or the washrooms after every bite to eat. I had found one bike to look at but being at Mount Marta I found myself aborting the trip due to the problems I was suffering. However after a brief respite in the condition, I managed to find a suitable challenging bike, when I purchased an eight year old Sachs Madass.
It's a German make and a whopping 125 cc. I had to get a roadworthy certificate before I went to register, but to my surprise had to wait a whole week to get it in for a test. The bike passed it's test yesterday which is where I met Swanny, who like most bikers has a heart of gold and works in the same look out for each other ethos we bikers share.

While sitting here waiting I got myself involved watching cricket at the local park and have become the only supporter of Melbourne Helenic Cricket Club second eleven. It has only been in existence for three years, but what is unique about them is that they were founded by Greek Australians. I have had such a good time with the lads and been treated to a drink and sandwiches in their lunch break. 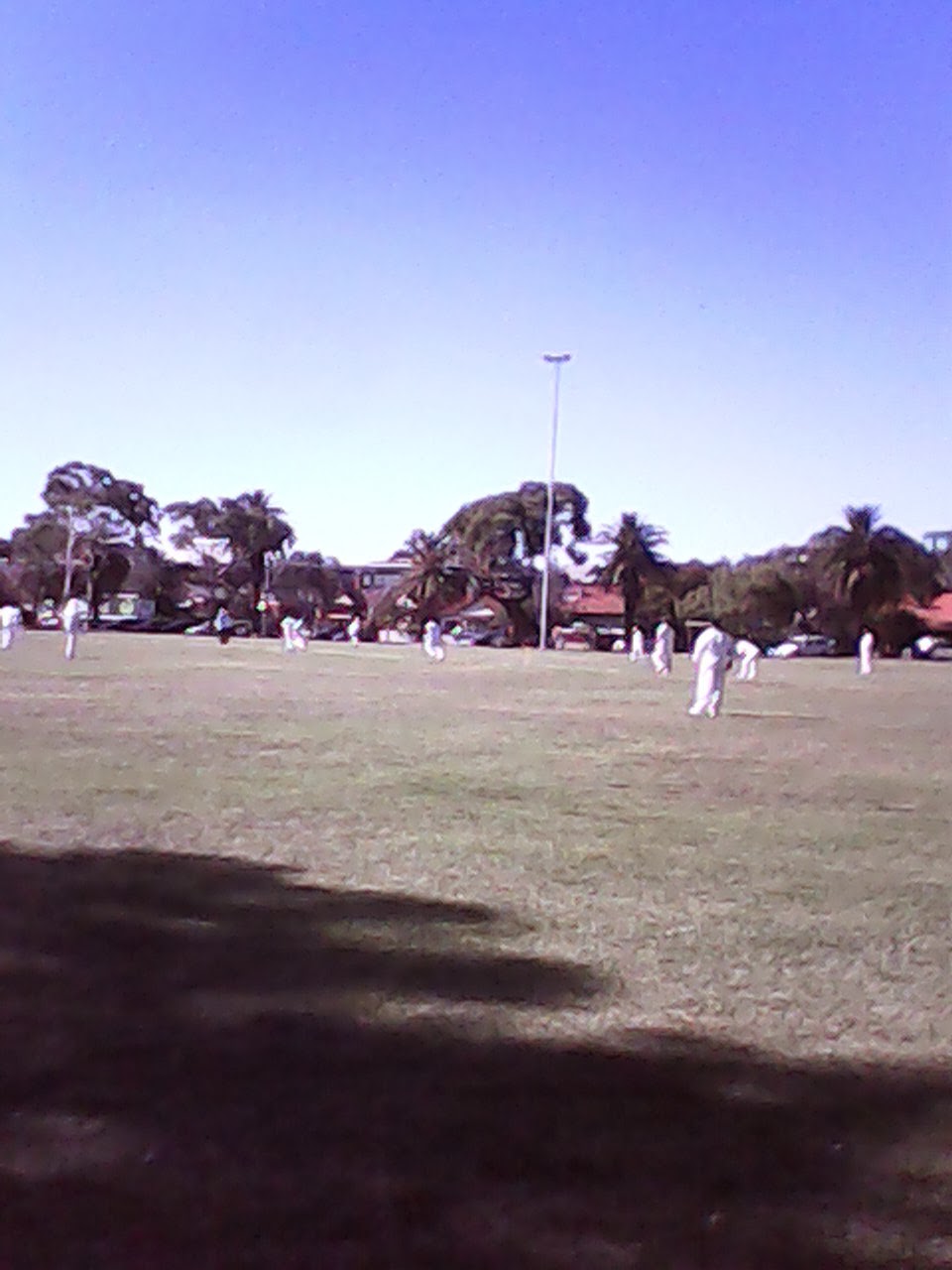 As they are playing in the play offs for the title I decided to dye my hair, for The Leukaemia Foundation sponsored great shave or hair dye, this weekend, blue and white in support of them and attend the two day game. I am also hoping they don't go all the way to the final as I will be sorely tempted to hang around till then. We had a laugh last weekend when I told them I was a lifelong supporter and it was my dream to come out here to watch them play only to be told of their little three year existance. I had the idea to write a spoof story and try to get it in the Port Philip Leader but have had no joy. I have pasted it below for your enjoyment

Melbourne Helenic Cricket Club welcomed their longest, oldest  and most fanatical  supporter in their final game of the season last weekend. Harry Trow who flew from the other side of the world to watch his favourite team earn a place in the play off finals against...TBC.... next weekend and was on hand to see an exciting display of batting and fielding against ....TBC..... that earned the Helenics a place in the finals. Helenic a Greek founded team are no strangers to the play-offs this weekend the 16th March, having been runners up before, but are hoping that Harry's presence will inspire the team to greatness this time round.
"It's just fantastic to be able to see my heroes out their playing and giving their all for the fans" said Harry, who is turning a shade of Aussie brown having baked in the Melbourne heat wave of Labour day weekend.
"As head of the supporters association and president of the overseas supporters I will be giving it my all and I just hope my rendition of 'You'll Never Walk Alone' is so bad that it keeps the  opposition fielders hands clasped over their ears instead of making catches, particularly as I have given all our batsmen ear plugs" added Harry.
"I was thinking of organising a bus for other supporters to get to the game, but my MYKI card is flat out at the moment so it's a walk there I'm afraid, unless any motorists who spot me with a Greek flag draped over my shoulders will give me a lift" added Harry
Harry is also hoping to get signed bats from his heroes to auction on e-bay, for the charity he is supporting in his ride on a 125 cc motorbike to Cairns returning via Alice Springs and Adelaide. That charity is the Luekaemia Foundation of Australia and he hopes to raise some sponsorship for a hair colouring next weekend, with it  coinciding with the date of the 'worlds greatest shave or hair dye' for the foundation.
Harry was intending to do a sponsored hair colour, and in view of his teams success, has decided on a blue and white striped hair dye to coincide with next weekends two day game.
"It will give an added incentive knowing I will be supporting two teams in one go " quipped Harry "but first and foremost I need to gee up the loads out there to get the success our great club deserves, even if reaching the big final might delay my departure to Cairns"
Harry's first game at home is soccer and his rendition of 'come on you whites' was cut short when he was informed that both teams play in white.
"I like to watch village cricket in England as often as I can, They play a two over game there, spread over six hours, with time spent huddled under an umbrella in the pub beer garden between overs, sheltering from the rain, but the atmosphere sometimes is as good as the flat beer we drink" Harry explained, "and it's very much the same here as regards overs per game, except you can sleep out under the sun between the first and last over."