My India ride was for the benefit of Project Mala, an educational project in North India that was started by an English guy, who wanted to eradicate child labour in the carpet industry of the region. Though times have changed and education is provided by the state Project Mala still provides the highest standard of education, especially to the poorest of children in the area. 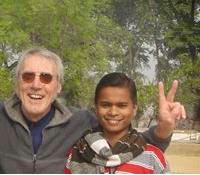 I was privileged to be invited to the project to see the work carried out there and meet the children my appeal was helping. It was an education in itself for me, who has only witnessed the children in the affluent west who take school and education possibly a little too much for granted.

But the story I am about to tell you is about one boy
and I think his name was Sudip.  I was challenged to a game of  chess by Sudip after I had been annihilated by the chess champion of the school. I accepted the challenge of Sudip as he looked no more than eleven years old and I thought I might have a chance. I lasted possibly four moves more than my earlier thrashing. So what makes Sudip special to me and brings tears to my eyes when I think of him is that while the school project recruits it's students from the poorest rural areas, they are limited in the spaces they can provide, so, much to their dismay, children have to sit an entrance exam. Sudip, whilst being a clever little boy failed to make the cut and wasn't offered a place at the school.

The first day of the term arrived and all the children who had been accepted arrived for enrolment, including Sudip. The staff took him to one side and explained that he hadn't been accepted and that there was no space in the class for him. He walked away, but still with that wonderful smile that he flashed every time we met. The children then went to the classrooms they were assigned to and when the teacher walked in on one classroom, there at a desk was Sudip.

The teacher said nothing, as he didn't want to embarrass him, but before the end of the day the teacher drew attention to Sudips presence to the head master. After school the headmaster pulled Sudip to one side and explained again that, he hadn't been accepted and that he shouldn't travel to school the next day.

The staff were at a loss what to do, but the head master spoke to him the day before the school uniforms were issued. "Sudip" he said " tomorrow all the children will be given their uniforms (the school makes them on site for free due to the poverty of the parents). "Only children with a uniform can attend after that" he continued looking into Sudips eyes to see if there was a recognition of this hardest of facts. Sudip smiled and left for home.

The following day, all the staff were waiting at the gate to see if the message had got through.

Sudip did not show.

Three days later a teacher walked into the classroom to greet the children for the day.

There at a desk was a smiling Sudip, kitted out in a uniform his parents had managed to make, by hand, with materials similar to the schools and in the same colour.

I have to add at this point that Sudips parents are both handicapped, which in India is a very big burden. More so Sudip in spite of looking eleven years old, is in fact fifteen, but suffers from growth hormone deficiency, that would be treatable here in the west.

Because of Sudips determination to have an education and to doggedly refuse to be turned away resulted in him being accepted as a student who after six years is still studying as hard as ever and smiling as he always does.

He is my little hero and I look forward to seeing him again this year when I return to the project.

Wow! What a determined young man. Good for him. I wish him well in his life and his achievements.

Wow! What a determined young man. Good for him. I wish him well in his life and his achievements.