Mumbai to Varanasi on a Cheap Rail Ticket

I arrived at Varanasi via Allahabad on the cheapest train ticket I could get that included a sleeper birth. It cdadageeost 325 Indian rupees which is about $5 US. The first train was cancelled due I believe to fog in the Northern areas of India. I found my seat and I had the lower berth which left me to the mercy of the other three passengers who were seated on my berth. The main problem was that there were in fact five people sat on this berth and I was wondering what berth they had been allocated.
The journey is slow and stopped for long periods at a lot of stations. Eventually the man in the middle berth decided it was time to sleep which involved raising the back rest to make the middle bunk. I wasn't ready for sleeping but with my headroom reduced there was no alternative but to lie down. Now I am not sure if the two young lads who were sitting on my berth were also allocated my berth and they had decided to allow the dadaji  (grandfather) to take the berth as is respectful here in India but it resulted in the two young men sitting on my legs for the couple of hours I slept, one who had the sharpest elbow joint I can remember anyone having. That sharp weapon of an elbow woke me on several occasions and I was shrinking myself towards the window to avoid the pain. This was good for an hour or so but at about 1 am I woke with excruciating cramp in my legs. At this point I decided to allow the young man the whole berth and went and stood between the cariages till 4 am, then decided to give him a bit of his own medicine and draped myself over his legs to get another couple of hours. 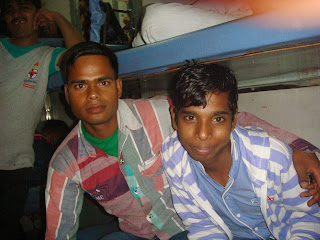 There is no end to the amounts of services from chai (tea) to soft drinks and burianis that are hawked throughout the journey by five or six individual vendors, which increased at various station along the route.
I had been warned against not taking a first or second class sleeper by Indian friends who were concerned that I would be robbed by various cheaters with frequent regularity, but it was far from the reality as my companions proved to be the most humorous of characters and in spite of the fact that none of us shared aeach others language, excepth them of course, we got on like a house on fire and to the contrary they were more concerned about my well being than any riches I might have upon me.

It was a 25 hour journey in the end and I eventually arrived in Allahabad. However I couldn't find a decent or cheap enough guest house even with the help of my rickshaw rider. He did want to continue trawling further afield, but I had spotted and English beer and wine shop on the street and told him to stop immediately. I;m not sure about the English beer side of things but they had my favourite Indin strong beer of eight degree proof at 105 rupees and a roof top area where you could drink, as drinking on the street id against the law here. After a couple of refreshing beers I decided to head back to the station and avail myself of the floor for a nights sleep which I was desperate for, due to the lack of the previous night. I snuggled down in my sleeping bag as it was quite cold in the night in the north and was quickly asleep with the hundreds of Indian who were also camping there. I was woken rudely at 4 am by shouting and realised they were cleaning. No time  to come round. They were just emptying buckets of water over the floor and if you weren't up you got soaked. I went out for a cigarette and come to my senses and was engaged by a couple of Indian guys, one who wanted to enrol me in there charity work, which wasn't obvious till we had walked a half hour to his house and another guy who was more savvy about finding train times to Varanasi and booking me a ticket, all done by hustling to the front of the usual crowd by the ticket window. To be fair the other guy was OK and helped me negotiate my way to another station as the train I was waiting for was delayed by four hours, but I felt I had been hustled when I got to his house so opted to take my leave and head back to the station. I arriv ed in time to junp a train and stood between carriages expecting the journey to be about two hours most. It took five hours and cost me a further 100 rupees for standing between two sleeper carriages. Instead of standing between two general class carriages. I don't know what the difference is as they both stunk of urine from the toilets. Maybe urine from a sleeper class is more fragrant. I was annoyed at my one GBP pound fine as ridiculous as that may seem, but I had got my rupee head on at last.

I escaped the usual touts outside Varanasi station and headed for the nearby main street to find an ATM. Unfortunately none were operational and I was standing in the street, when I heard my name shouted. I turned to find a French couple I had shared a dorm with in Mumbai in a tuc tuc. They had just arrived five minutes after me and remarkably spotted me in a crowded street. Helps to be white at times as you tend to stand out in a crowd. I squeezed into their cab and travelled with them to MacDonalds where they had decided to eat and although they told me there hotel I forgot it in seconds as me and my driver headed off to find an ATM and a guest house.The guest house I eventually found was at the back of the Ghats on the banks of the Ganges. It was cheap and had a rooftop bar and restaurant which wasn't. I went for a walk along the banks of the Ganges and was amazed to find touts who wanted to show me the cremations. I declined on a matter of principal.
But you have come to my country to understand our culture and you refuse to watch a burning were his words.
I thought long and hard but decided if this young man came to England I would not take him to a graveyard to observe a burial.
I walked on and ignored the burnings and instead just absorbed the atmosphere of this place I had seen on TV many times and had the culture and customs explained clearly. I have an issue with culture tourism as it seems an invasion of their lives without any connection with the people living there. Should I wish to engage in their customs then I will when I am engaged with the people there and living their lives with them.

I returned for a couple of beers and returned to my roof top restaurant for a beer and a meal, but more importantly to contact Project Mala with a view to visiting the following day,
at December 30, 2013