A Report on my Time in Mumbai

I ariived in Mumnbai two weeks ago today with the intention of buying a bike here and riding anticlockwise around the coast to Kalkota. However after failing to buy a bike at the budget I could afford and with the more important issue of not getting the maximum benefit for the project in Uttah Pradesh if I bought here, I have decided to travel to the project and purchase there and sell for or donate the bike to thProject Mala when I finish the ride.

I have just bought my ticket for a Thursday departure to Allahabad for a staggering 325 Rupees but it is only for a seat. I really need to start saving to increase my budget for a bike to give me more scope. Mumbai is fairly expensive and hanging around leads me to the pub where beeer is not as chep as I had hoped.

It was a big culture shock and no matter how prepared I thought I was, to the conditions, the poverty the noise and everything else that goes with life in this country I wasn't.
I landed at the airport and not realising how the ATM worked found myself outside the terminal with no reupees and at the mercy of the touts. I had intended getting the metro at the airport, but that building plan has not materialised yet so it was tut tut to ATM and then a taxi. Six pound in all which is nothing for the length of the journey but six pounds I didn't want to spend. The pattern continued for a number of days and I was spending in Pounds instead of Rupees in my mind. I soon realised you have to forget that something like a cup of tea is 12 pence and thing of it as 12 Rupees because I have in theory only 1,000 Rupees a day if I am to manage to buy a ticket to get to Australia at the end. 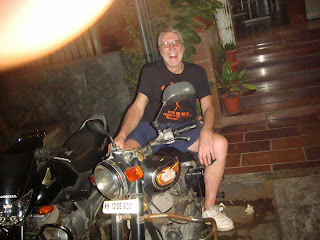 I quickly endeared my self to the locals in what's called little Britain near CST Chhiparata Something Terminus. I quickly joined in with the porters unloading a wagon, carryin boxes on my head as they did, made friends with the bar staff and the locals who drank there and a gang of young men who were having a birthday party in an office doorway. One of the lads there was Appu or Happy as he is known. It was only while one night sitting in the bar, I discovered he lived in the street squat across the road and has done since 3 years old. I suddenly realised I had ignored these people for a week nearly and felt so ashamed an d to the point of tears, that I hadn't engaged with them. A family of three sisters and husbands and the most beautigful children and Happy himself. They were all lovely people and About the only English speaking people here, except some customs officers in the bar.

I then met a guy who I learnt to trust to act as an agent to buy a bike to get past the registration complexities. He lived in Cobala and rather than walking up and down there I moved to a hotel in his srea.
I put my Spanish friend Antonio who was also looking for a bike, in touch with him and he successfully negotiated a lower deal for a cost of 20 GBP. However after trying to find a lower budget bike for myself, I changed tactic as explained above.

I had the most amazing evening in Andheri on Sunday evening as a guest of the Mumbai Liverpool FC  supporters club. West Andheri, which is North of the Airport was mindblowing. I have never seen so many people, tut tuts, buses in such a small area in my life. It was impossible to stop walking or trudging as you just got pushed along by the person behind you. I was fortunate to find the bar in time for the game due to not having an address, but I am so glad I did as the lads there were amazing, both in the support and their hospitality. 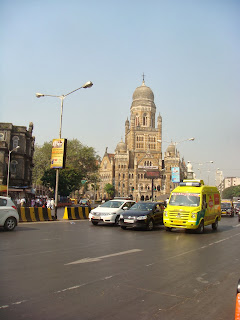 Taxis are great but you have to be careful that you don't get charged white rates as in most other purchases. I preferred travelling the suburban trains which can cost as little as ten rupees for a thirty kilometre journey.

I will up date again on arrival in Allahabada