The North West of England Visits

Well the ride got underway this week, after a stuttering start and now is the time to start writing about it.
I will start with my departure point, which is in Bradford. Saltaire to be precise which is a national heritage area. Saltaire is a model village built for the workers at Ebenezar Salts Carpet mill. The estate is a compact estate of terrace houses and some bungalows.. While Ebenezar was an abstantee with no pubs on the estate, there is now a healthy variety of dinking holes and wine bars and cafes and the mill is home to the Hockney Gallery.
IIt is a lovely part of the world both for living and for visiting with Ilkley Moor only two odd miles away and some of the worlds best curry houses nearby. We all remember the famous song - 'On Ilkley Moor bar t'at'. (On Ilkley Moor without the hat)
It is within easy reach of the Yorkshire Dales and the North Yorkshire Moors and if that's not enough Bradford has a Sam Smiths pub where you can get the best stout in England for £2.20 I am fortunate that I live with a great couple who are actually older than me and I happen to live in a garden they paid me to install. Kevin Atlins and Inger who is of Danish descent are a great couple and Ingers Herring Xmas's are a delight. There is Herrings with mustard, herrings in curry, herrings in tomatoe, herrings in brine, herrings in herrings....
Kevin is an ex journalist who is a stroke victim the both of them spend their lives filling the cardboard recycling bin. The bottle recycle bin I manage to fill with Kevins help. They are very supportive and tolerant of my oily hands all over the kitchen and have sent me off with a wonderful donation to Project Mala

.
I left home on the Cagiva, as I was still waiting for parts for the Triumph. I was getting frustrated at having been delayed and decided to go on a bike I had only ridden for 5 mile stints. It had problems with the charging which I hoped I had resolved, but that wasn't the case.
At least I got past Keighley, where I had broken down on the Triumph, but I knew my battery was draining and my lighting would be dim if I arrived in Liverpool after dark. I had hoped to catch Mark Muirhead in Ormskirk the place of my birth, but Mark had a problem with a flooding bathroom so we re-arranged to a later day. I did arrive in the dark and was riding on candle power but survived.
I went direct to my daughters in Childwall Liverpool where I caught up with my dear grand daughter Sara Trow in the Abbey pub.
The following day I set off to meet Helen Sara McIntyre. Helen was one of those lovely women who always seemed to have a smile and an encouraging word for others. She was a friend of a couple of the guys I played football with for the LFC supporters team iLFC. We were a team set up by Andy Heaton of the TAW and the ethos of the team was to spread friendship to other supporters of other teams. It was Nigel Shaw who was instrumental in taking us into Europe on those Champion League nights, playing against Inter Milan, Barcelona, Atleti Madrid and others.
I arrived at Helens on time and was worried as she was late returning home. It turns out she is more batty than me and wasn't expecting me for a number of days. We spent a couple of hours catching up, who was where in the world and who was doing well and who wasn't etc.
Helen had just started work after having two children and was working as a supply admin work in schools. Her story of the last five years wasan eye opener to me. Far from the happy Helen I knew it transpired that she had depression at the times I knew her. She told me that it was the birth of her first born which lifted her out of her depression and that since then she has been on an up. Helen told me that her first weeks wages went to a charity, which she hoped her husband would accept as worth it and part of being Helen. Helen is a character and somebody I love dearly for who she is. A real inspiration for others and for me especially.
Thanks Helen for those lovely moments and the energy gels to keep me alive. More so the generous donation to the Project Mala cause.


My second visit on the Tuesday was to my cousins Les and his wife Colette, just three or four miles away from Helen. I hadn't seen Les for 42 years when my dad died. I knew that Les is a volunteer seaman on tall ships project and I was interested to hear all about his life on the high seas.
What I didn't expect, was being presented with my Uncle Harolds first world war history, letters from the trenches, souvenirs and his medals. Uncle Harold was wounded, but after treatment in Belgium returned to the front where he was killed in action. Les was given this folder by my Auntie Ess for his safekeeping and now he handed it over to me to be the guardian.


Les's father was also called Les and was responsible for me getting an art degree 20 odd years ago. He was an amateur artist himself and due to an injury playing football and occasional losses of memory, wrote down techniques as he mastered them for future reference. I remember when I was fourteen or fifteen, babysitting Pam, Les's younger sister and reading through this 'book' of my uncles and being inspired to paint and draw, although it took another twenty years before I enrolled at art college, before going to University. Les had the same sense of humour that I remember that my father had and his father too. It seemed, as I reflected, that maybe humour and style of delivering that humour, must to some extent have a genetic imprint on top of how we mimic our fathers.
The other incredible talent that Les has is his 'Sea Sick Steve' guitar making. From a cigar box, a pan lid, sink plug holes and his dads cap badge he was able to make a three string guitar, that was open tuned to G and which I tried. It was a remarkable instrument and later I was able to view it played by his son in law with a bottle neck blues style. 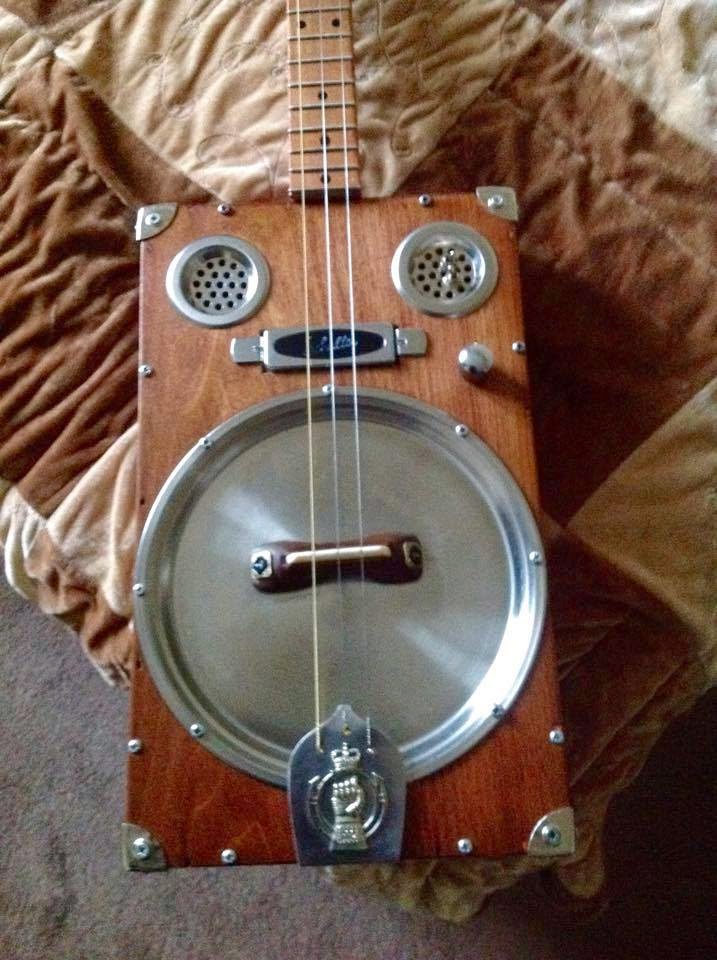 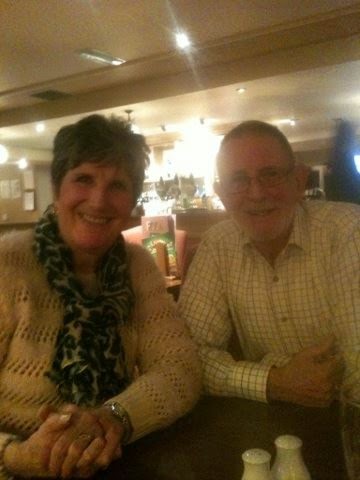 After arriving at my daughters in north Liverpool, I got news that my parts had arrived for the Triumph and although I wanted to continue in the North West I decided to head home and deal with the repairs to the ride bike.
I left in the morning hoping to ride ahead of the incoming rain and was doing well until the bike broke down in Preston. The rain came and I was unable to deal with the problem so opted for a rescue. 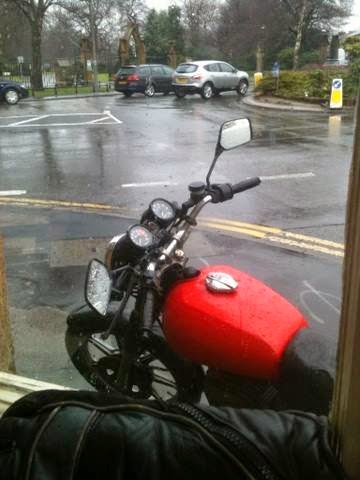 I was there for five hours before being transported home, seven hours after breakdown.
The next day I had ther Cagiva running within an hour, fuel problems was all it was.

The return home gave me the opportunity to visit a good friend Nigel Corner at Harrogate Railway FC. It was the fifth attempt to visit the club due to postponements of games, but I was determined to get there and by bus due to the problems with lighting on the bike.
I arrived in good time for the game with Paddiham and duly met Nigel in the club house. He was in banter with other committee members and supporters and I felt a little guilty intruding, but Nigel was fine and gave me his full attention. Let me say at this point that I knew Nigel from an LFC forum, so to see him immersed in his first passion, a non league club, just around the corner from where he lived was rather strange.
Nigel took the chairmanship only a year ago after being general manager for some time. A supporter of the railway since he was six years old, you can't ask for better loyalty when selecting a chairman.

We went down to the pitch and I was taken aback when I saw a bucket at the turnstyle for donations to Project Mala, which I immediately threw in my gate fee of three pound concession as I was allowed in as a special guest.
I wasn't expecting this level of hospitality, as my first attempt to visit the Railway View was out of curiousity rather than promoting my charity work.
We stayed down at the 'away end' in the first half which played havoc with my back but a half time sandwich and a cuppa put me right for a second half down the Kop end.

The pitch has a bit of a slope and I estimated it was about 2 metres difference from corner to corner. The pitch was also suffering and the ball was taking bobbles every second making controlled footnall difficult, although the class of the team under the managership of Billy Miller, was evident in the way they tried to play. I loved the cameraderie of the supporters watching this lower level football and it took me back to my playing days in non league and had me itching to get my boots and gloves on.
Nigel puts so much effort into this passion of his and manages to do it while running a day nursery and having five children of his own. Running a club and a business obviously doesn't impinge on life, if Nigel can still manage a family of five children too.


On top of this he manages to even run a travel agency amidst the heavy schedule. In fact I can't remember anyone who puts so much work into so many venture as Nigel and yet he can still show this amazing fresh faced look, when all I would want to do on a Saturday, is to go and have a lie down.
He has great ideas to how the club can progress and I wish him well in his efforts to move the club up a level. Nigel is one of the most generous and accomodating guys you could find and is in with a great bunch of committee members and supporters at the Railway, which was evident when I was presented by the funds of £75 raised from the bucket collection, raffle and donations from others as well as the mighty chairman of Harrogate Railway FC. On behalf of Project Mala I salute you Nigel and HRFC.
at March 18, 2015