The Long Ride to Norway

(photos to be added when I manage to download)

I left the Titanic Hotel a new man and flew out to Spain to visit the Moto Almuerzo at La Cisterniga near Valladolid. The Cisterniga Roadsters are old friends from my first ride seven years ago and while I was excited to visit them all, I was disappointed not to be arriving on a bike of my own.
I had made a decision to try and locate another Derbi so that I would have a cheap transport and a shed full of spares if needed. The search was fruitless, but I enjoyed a wonderful couple of days with the gang there, before heading back home to England.

It didn't take me long to identify a replacement bike, a Honda Rebel, which is a 250cc and after fetching it back home the race was on to have it tested and ready for departure on May the fifth on the Santander ferry, with a rearranged ticket from my earlier calamity. My intention was to visit some people on the way through England and everything was going smoothly.

My first port of call was to Sara and Andy in Rugby, where we immediately went round to Cas's pub for drinks. Sara and Andrew I know through football and Cas who manages the pub with her sisters is also an avid Liverpool supporter. Sara and I spent the whole evening putting LFC's world to rights while Andrew made some winnings at the evenings poker. Not all out of town supporters are people who have attached themselves to the club on the back of success. Most have some family connection with the city and so it is with Sara whose father was from Birkenhead and took her to watch Nottingham Forest playing Liverpool. She loved Liverpools football so much she became an instant fan, Rugby is of course the home of the Rugby School and it was here that Rugby football came into existence. Sara is also a rugby union supporter and follows Northampton. But I would say her main passion is the same as mine - LFC. I can honestly say I have never enjoyed an evening so much especially with her two adult sons and lovely young daughter. I was offered a night there as the rain was coming down heavily.

My next visit was Tuesday lunch with another good Liverpool supporting friend, Parm Sahota, a solicitor who lives in Harrow but works from his office in Twickenham. The rugby theme continued as Twickenham is the home of the national stadium for that sport. The ride there was a wild one with gale force winds and heavy showers which left me cold and wet by the time I arrived. We met at the famous Cabbage Patch pub, which is dedicated to the sport and immediately set about a small liquid lunch. Parm specialises in medical incompetency claims, but fortunately, deals in some other legal work, such as a criminal injury claims such as my own. Again parm has some attachment to Liverpool in the family and has been supporting the reds for some years. Being a member of the Scouser Tommy forum as I am, I knew a lot of Parm's views on the team and the club before hand, but it's really good having a face to face chat about the game, instead of over the internet We had one good couple fof hour discussing various issues before Parm had to return to the office, which was a shame really as I could have talked for hours with him and not only about football.

I headed across to the City of London for another personal visit to a good friend and was explaining my schedule of sailing out on the fifth of May and was stunned to find that I had got my days against dates mixed and my ferry was already sailing without me. That was £200 down the drain and left me little time to complete my Spanish schedule even if I had money to book the next ferry to Santander. I stayed the night in London to regroup and made the decision to set off for Norway and prepare for a June assault on the Cape North for the mid summers solstice on June the twenty first.I booked a ferry from Dover to Calais for the following evening and also a return flight from Oslo to England to help my daughter with her wedding.

My ferry departed at 1.30 am on the Thursday morning, which I actually succeeded in boarding. One hours sleep and I was in France heading to Holland. It was a cold morning so I decided to stop at a services and take a break while and wait for daylight. I managed another hours sleep in my sleeping bag on the grass before light rain woke me. Refreshed I continued and it wasn't long before I was negotiating the Belgian interchanges and pulling in to avoid some showers and take advantage of the stops to nap while sheltering. The showers were becoming more frequent and the temperature would drop at these times, which became uncomfortable as I was equipped for a visit to Spain rathr than Northern Europe. At one point the rain became so heavy and the next srvices where so far away I pulled into a small town called Hoogerheide in the Netherlands for a beer while I sheltered and rested. The owner Tamara was really lovely and inquired as to my objectives and on hearing about the project, the ride and my intentions, immediately offered a donation of ten Euros which was quickly followed by five Euros from a young guy called Daryol who was also enjoying a beer. Peoples generosity always overwhelms me and especially their interest in hearing my story.

I left the bar and again got caught in another heavy shower and with my tiredness decided to find a room for the night and get my clothes dry, as I hadn't wrapped them and rain was leaking into my saddle bags. I came across a small town short of Willemstad a small pleasant town on the waterways. I found a bar whose manager recommended a pension at a bar further along the road at a modest twenty five Euros for one night.

Suitably rested and showered I visited the small harbour at Willemstad to enjoy a morning coffee before heading onto Rotterdam where the beginnings of the first issue with the bike began. After a few starts from traffic lights I noticed the beginnings of a clutch slip. I thought at first it was my imagination, but after reaching Alkmar, it had become significantly worse. I thought I might make it to Gronningen, where I would have more chance of finding the parts, but the thought of losing what was left of the clutch on the 15 odd km dyke at Den Oever, at the mouth of the IJselmeer was a daunting prospect. I pulled in instead at a small village named Hippolytushoef and booked in at a bed and breakfast for the weekend. Fantastic value at €30 per night I had a full flat with kitchen facilities. It was on Elfft but whose name I cant remember.

Saturday morning I had located parts back near Amsterdam and set off early hitching a lift. Two wonderful people got me to Pumerend and then another wonderful woman An Marie Meyn, the sister of a bar owner, drove me out to the parts shop and waited for me to return to town. I decided on a train back to Hoorn and a bus back as it was getting late, which went very smoothly. 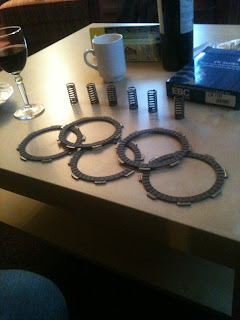 The following day the owner of the guest house arranged a facility with a neighbor, called Meno, to use his tools. He was fantastic, but the biggest surprise was entering his large barn/garage where he showed me his collection of classic British bikes. After the repair to my bike I persuaded him to offer me coffee in the morning when I could photograph all the bikes. He had arranged for another friend, Gerard to come over, and this other guy had a motorbike showroom with another selection of classics including a Manx Norton that he used to race. It then transpired that he had the same clutch plates as mine in stock and would have save me a days travelling. We went over and more photos and a generous donation from them both to the charity. I eventually left and headed off to Groningen on a beautiful day.
# 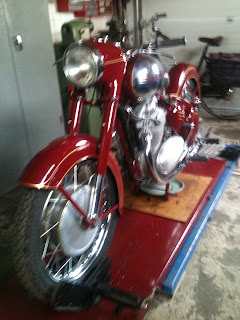 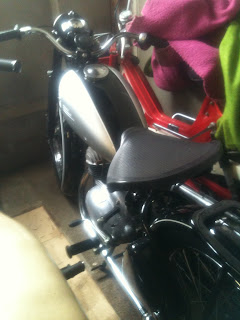 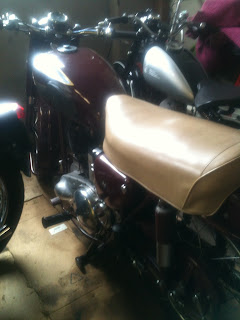 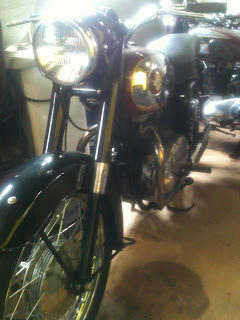 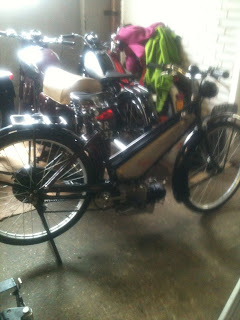 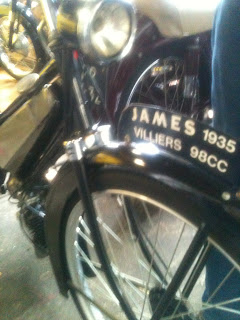 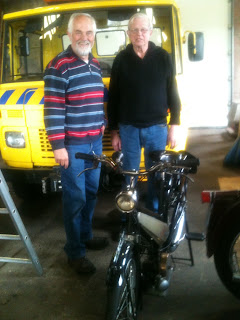 I headed through Groningen, stopping there for a night at a great bar and quiet sleeping Place and on up to Elmshorn in Friesland North Germany. I have been to Elmshorn on a number of occasions to visit German friends and their families, but had lost touch many years ago. My first port of Call was the flat of Hilda Raeder, but I could see from the name plate on the door bell that she was no longer there and more than likely had even passed away. I went to find the husbands grave of my other elderly friend at the time Emmi Haustein, who almost certainly would have passed away since we last met and although I found the cemetary, I could not find his grave. The grave stone would have told me the date of Emmi's Death as she had had her name etched into her husbands grave when he passed away. Disappointed I found a bar and then a bed in a childrens play area, before heading northwards in the morning to Denmark and Jutland.

The weather was not being kind and I was forced to by a coat from C&A for €10 which helped to some degree. However the temperature fell even more and I had to stop at a motorway services for some hours to warm myself up. I stopped once more for a night before heading on upt to Friedrikshaven to take a Ferry to Gottenburg in Sweden. It was a national holiday when I arrived there and there was no one in the town, even though it was a Friday. I found a pub which was packed and spent a the afternoon and eening in great conversation With the owner and a couple of regulars arguing about, of all things, a Danish landscape painter. It made a change from football arguments and With the help of the bar owner booked a midnight Ferry.

The Ferry arrived 3 am in Gothenberg and  managed to get some sleep under the footbridge entrance to the terminal. I waas shocked when I awoke to see hundreds of People heading over that bridge to Board the Ferry to Denmark. What shocked me was they were pushing warehouse type trollies in order to bring back their duty free alcohol, they would purchase over the other side. I was off as quickly as I could to change my Euros to Kroner and headed North to Norway and Oslo.

The entrance into Oslo was a Complete surprise to me. Situated deep inland on a fjord the scenery was absolutely superb and I was only 10 kms from the city centre, My deestion was a friend from Liverpool who had moved to this area after living in Kiel in North Germany. My friend Martin his wife, Sarah and their lovely little boy Lasse lived to the east of Oslo and it was a relief to have finally made it to this point of the ride. It was perhaps one of the longest stretches between visits.