Oslo and the Ride North to Nordkapp

I had three days with the Von Bargens before flying home for my daughters wedding and decided to use the time to be productive in building them a new garden. It proved to be the beginning of a bigger project down the line which will be revealed in later postings.

Martin is originally from Liverpool, but got curious over his German roots and finished up teaching biology in an international school near Kiel, north of Hamburg. After transferring to a school in Sandvika, west of Oslo, he met his partner Sarah a Canadian from Ontario and now have a two year old son of their own called Lasse.


Martin prides himself on his scouse, a dish that is common to Liverpool people and used to describe people like myself. The dish though was originally a Norwegian dish called Lapskaus and was a low cost meal that was probably brought to Liverpool by sailors and became popular with the lower incomes working class of the city.

Although Martin was in no drink mode, he made sure there was plenty in the fridge for me with the more than occasional Aquavit a really potent schnapps as I later discovered. Nothing is too much for Martin and in spite of having his mother there still managed to cater to my every need in the gaps from the garden redesign.


Most of my friends are part of the Liverpool support base and one of the members from our Scouser Tommy website lived only five odd miles away. I made arrangements to visit and Martin taxied me over for a Sunday coffee and cake at Hans Jonni Kvalsvicks. It was Norwegians Independence Day and there was events happening at all the schools in the area. Hans is married to a Danish woman who although Danish had knitted the three dresses for herself. And two daughters in traditional Norwegian patterned design. Hans is involved in geology a d especially in the pilings for high buildings. His kids were great especially his youngest daughter, who while being a little cutie was a little devil and spent the whole afternoon beating me up before I escaped for a game of football with Hans and the other two children I n the garden.


I was fortunate to be on the same flight to liverpool as Martins mother, which meant I didn't have to find my way out to the airport. I arrived bak home and set about helping my daughter prepare for her big day. That day was really special and afterwards it was back to Norway to finish what I had begun before heading north to Nord Kapp, which at 70 degrees 11 minutes makes it the further most northern point of mainland Europe.
I was struggling with the work, suffering from all the injuries, old and recent, but between us we scavenged the woods for stone and logs and finally we were able to put In place the first plants into the newly sculpted terrace. It was then a matter of packing to make the eighteen hundred kilometre trek up north. I left on the Monday while everyone was at school and decided to head up the Swedish side of the border and it wasn't far inside Sweden when I suffered a cam shaft seizure or sticking valve. It wasn't apparent at first as I had been riding slowly due to a rather chilly evening. I thought I would open it up and make some progess when I realised I was nearly on full throttle. Was I going up a deceptively steep incline perhaps? Then it seemed to clear before I could determine the cause. It was some thirty kilometres, while behind a large van that I could hear the start of tappet noise. Fortunately I was at a busy crossroads at Sveg and pulled in at one of the petrol stations for a coffee and hotdog. I made the decision to stop the night there and made for the entrance to the community centre and bedded down for the night. 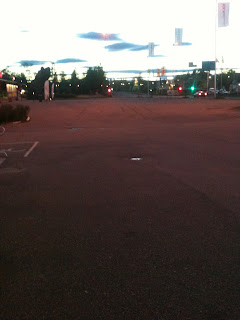 Refreshed I was soon on the way although I was concerned still about my sticky valve. It was a little noisy but was running ok. I reached the coast at Sundsvall and stopped for coffee and lunch.
The road north was not very interesting with little sight of the East Sea.
An overnight stop at the cinema entrance in Umea for sleeping and the following day managing to avoid heavy showers by adjusting my speed to skirt the back edge and speeding up to a avoid the next one. This continued up to the finish border where I headed north west towards Lapland. 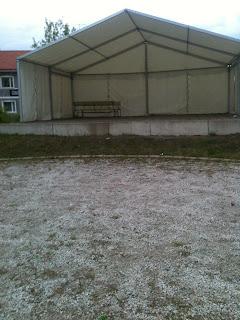 I stopped at the last town in Sweden on this route and enjoyed a beer before bedding down in a tented stage area of the town park. It was daylight all night at this point which was difficult to adjust to, mentally. The morning crossed me into Finland and to my surprise was a euro economy, which made me regret leaving the euros Martin had donated me at his house.
I wasn't in Finland long, but the I had to spend the rest of the day dodging showers again all the way to Alta where there was a brief respite before it rained again 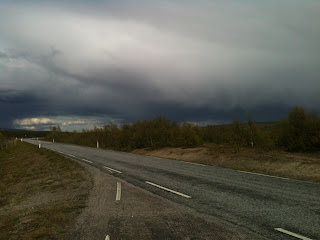 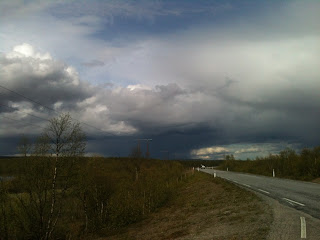 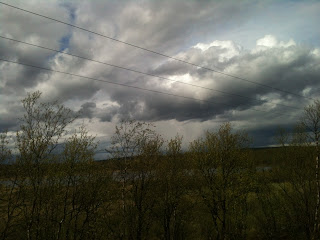 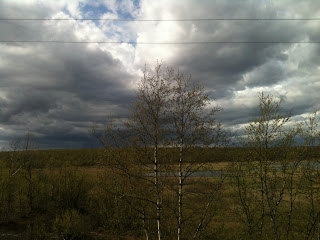 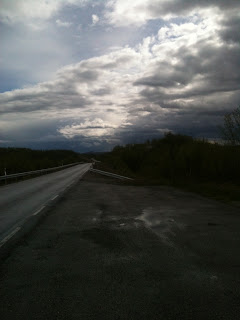 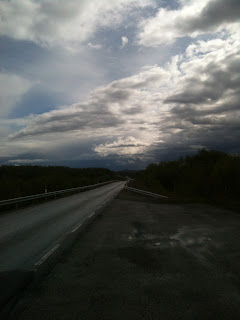 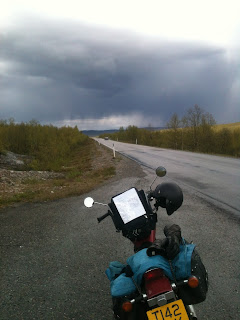 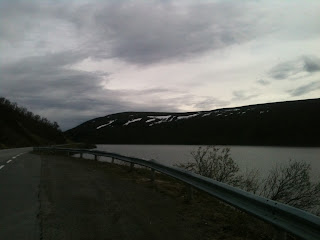 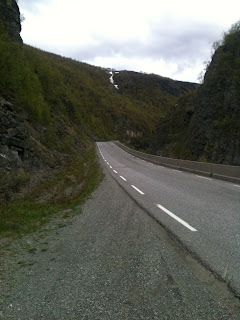 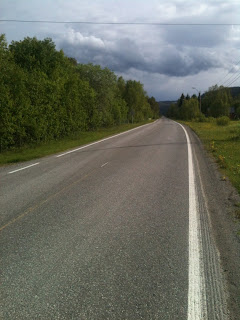 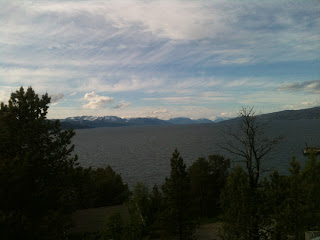 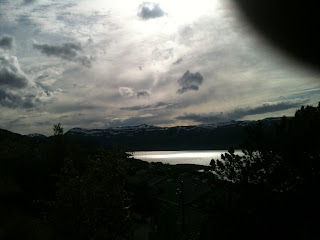 The route in was quite harsh with snow not many feet above me in altitude. On arriving in Alta yore confronted by a beautiful view of the Kafjord and the snow capped mountain range that runs the length of the fjord. I found the centre and a bar and enjoyed a few beers before bedding down in the cinema entrance opposite. After waking I was off to Honingsweg, a port just 35 Kms south of the cape. Summer hadn't arrived here yet and the ride o ver the mountain pass was an endurance test trying to keep myself warm riding at times under some threatening cloud. I emerged at Porsangerfjorden the fjord that runs out to the North Atlantic at the cape and followed the road along the side of the fjord for 85 Kms before entering the 15? Km tunnel that gets you onto the island Cape North is part of. It was here I had a lucky escape when I entered the tunnel. My glasses are transitions and were slow to clear and coupled with the dim lighting in the tunnel, I had to slow down. Suddenly I was aware of headlights approaching fast from behind and then breaking as they were less than a meter behind me. The following day the driver of that vehicle recognised my bike and informed me my rear light was not working and he never saw me till the last moment. I was grateful for his alertness and duly replaced the bulb. 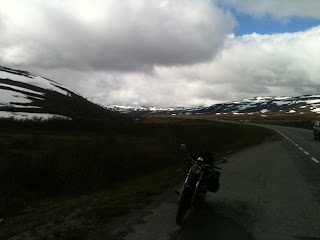 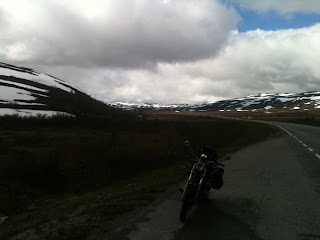 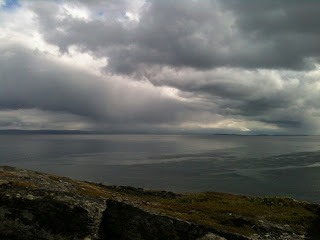 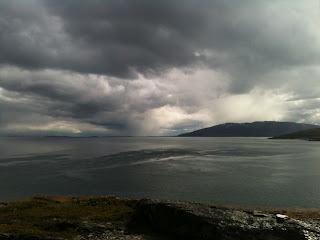 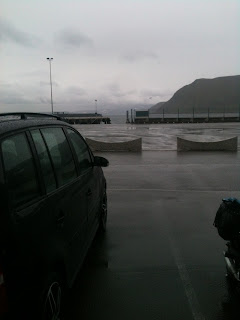 Honningsveg was smaller than I thought it would be and i walked  the main street to take a coffee and was ready for the ride up to the cape for the midnight sun. unfortunately the weather turned nasty covering the mountains in rain. I made the decision to wait till the following day which was disappointing as i wanted to see how high in the sky the midsummer midnight sun would be, but instead i settled for the delightful company of some locals in a bar. My hotel that night was a doorway on the quayside. I was sleeping soundly early morning but in my semi conscious awake ing I started to hear buses passing close by. I thought it was part of a dream at first, but as I opened my eyes, I was confronted by two cruise liners that had moored in the early hours and hundreds of passengers boarding buses for a trip to the Cape. 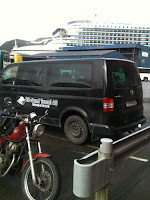 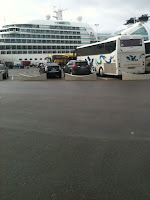 What amazed me most was that throughout all this. Not one person of officialdom had disturbed me or demanded that I remove myself from the area. It was still raining off and on so I waited till nearer lunch before setting off for that final leg to the  cape and althought the rain had eased the wind was strong and had a cold edge to it. However the scenery was breath taking. 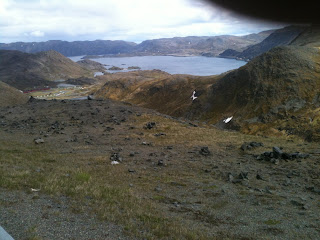 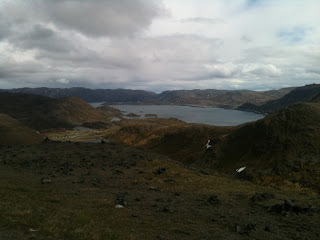 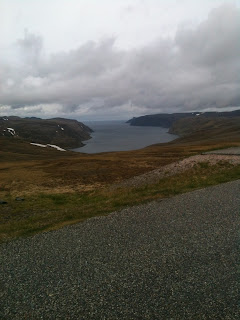 I wasted no time or money at the Cape, stopping only for a quick photo at the road sign before returning to Honningsveg to prepare for the descent southwards to Oslo 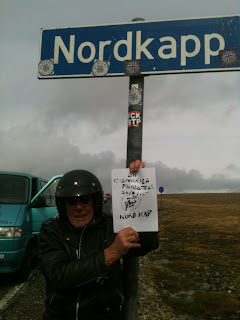 My route south included a visit to Tromso where another good friend called Tommy Ose lives, then a trip along the Atlantic drive taking in the archapellago islands running down the coast of Northern Norway, before crossing back to the mainland at Bode and so I made the decision to return to Alta before heading to Tromso to see Tommy.
The ride down was much more pleasurable than the ride up, although the temperatures hadn't climbed much and were hovering around the nine degrees. More important there were no rain clouds around and I arrived in Alta at about seven in the evening. I went straight to the bar I visited two days ago and immediately sat at a table with a heater in the stem of the table, to warm myself. I engaged with a couple of people there and one particular young woman took pity on me and bought me a beer. Her name was Marie and she was one of those special angels and I won't publicise her generosity, but she was intent on providing what she thought I might need. I had had a number of beers bought for me and decided that I should buy a round. First though was a toilet stop and to my surprise, when I emerged from the toilets the bar was empty. I asked the barmaid what had happened to my friends and she explained that she asked them to leave as they were too loud. That did not include Marie who had left earlier. I was delighted to keep my expenditure to a minimum considering the cost of a pint in Norway, but still I managed to see the night out.
I left the bar after 2 am and in broad daylight and I was a bit concerned where I would sleep as there was a police van parked in the square outside the bar and alongside my intended bed. I made a decision that I had to sleep and crashed in the doorway of the library only 10 meters from the police vehicle. The doorway had a grill and I thought it was for the rain, but it turned out to be heated and I enjoyed a most luxurious night ever there.
at September 28, 2015