I left the Lake at the back of Boomerang Bay in darkness, which I swore I wouldn't do, rpding at night, that is., but I was determined to find some semblance of civilisation for the night. It had turned a little cold and the fog was forming on the lake to the side of the road and was misting up my glasses making visibility against oncoming headlights very por. I eventually arrive tin Forster which is the entrance to the lakes that were sitiing to the west of the road and was quick to find the local hostelry. I also found the local information office that was suitable for a nights sleep under cover of the canopy that is afforded to most Australian buildings


The following morning gave me a great location for a morning coffee in pleasant sunshine and I was on my way fairly quickly back to the highway and north to Port Mcquarrie. The wind was picking up and was coming down from the North but it certainly wasn't a warm wind as it was originating from Antartica, before swinging back down the coast from up north.

Port McQuarrie was quite large and I arrived there mid afternoon. I found a library and spent an hour there before heading down to the beach to look for somewhere to stay for the night. There wasn't a lot of scope so I went further afield and visited the lighthouse, which was having an opening of roadworks that have transformed the area for visitors 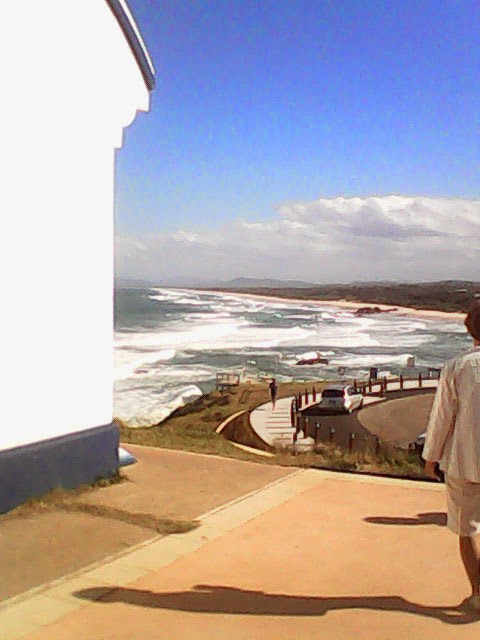 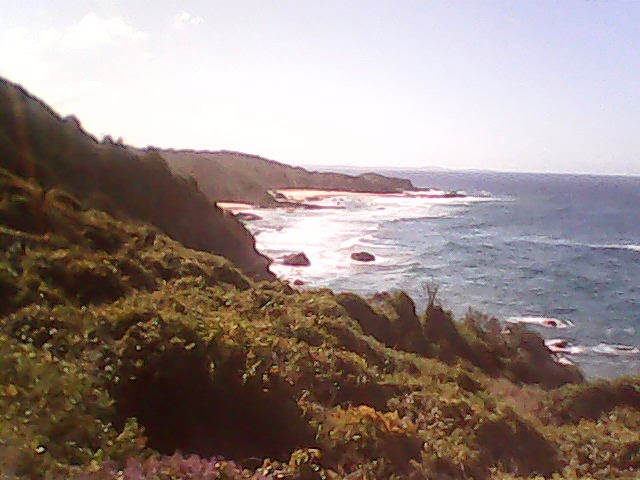 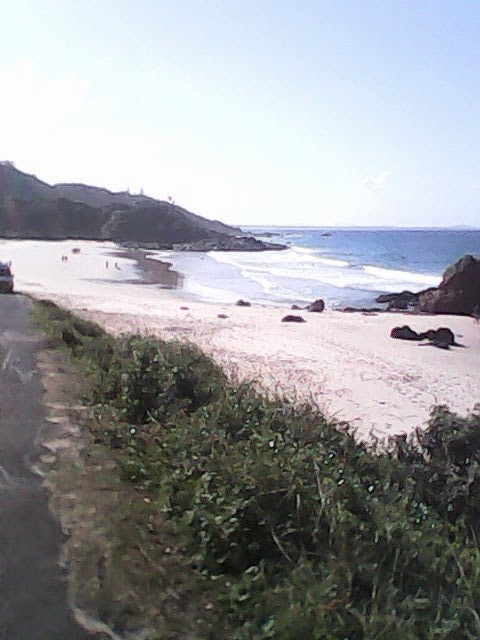 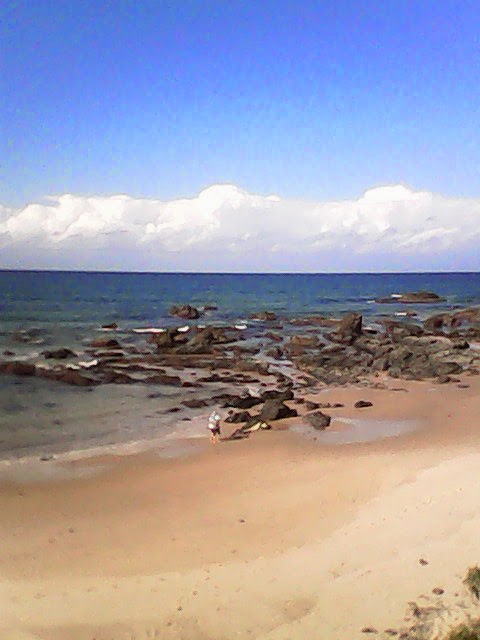 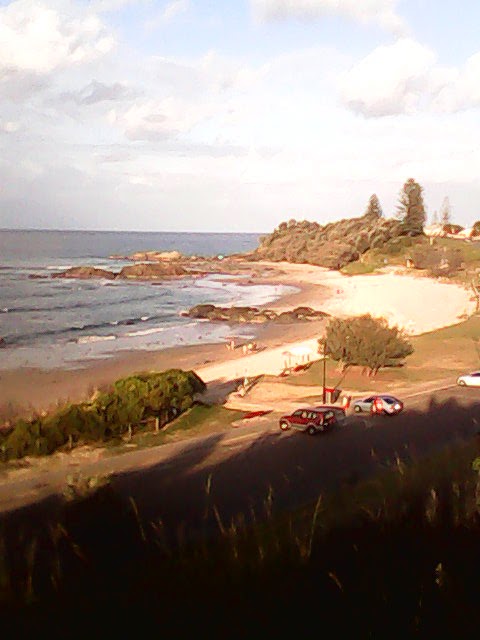 I returned to the main beach having spotted a place to stay for the night , near to the beach by Ixley Bowling club. The main area is shored with anti corrosion boulders that people have painted as memorials to lost ones or messages of various types, such as birthhday greetings or just 'we were here in ....' 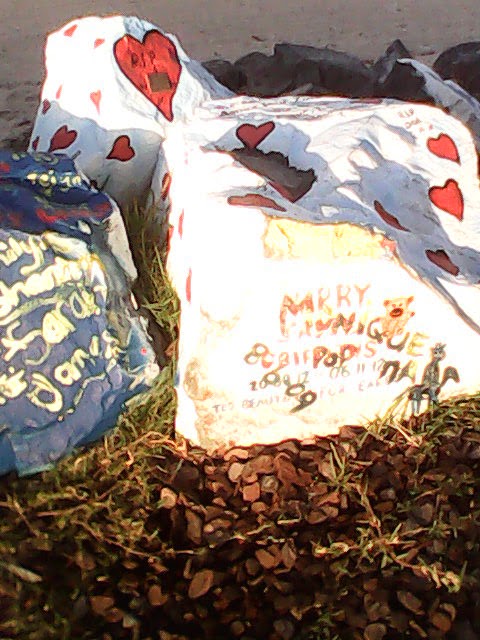 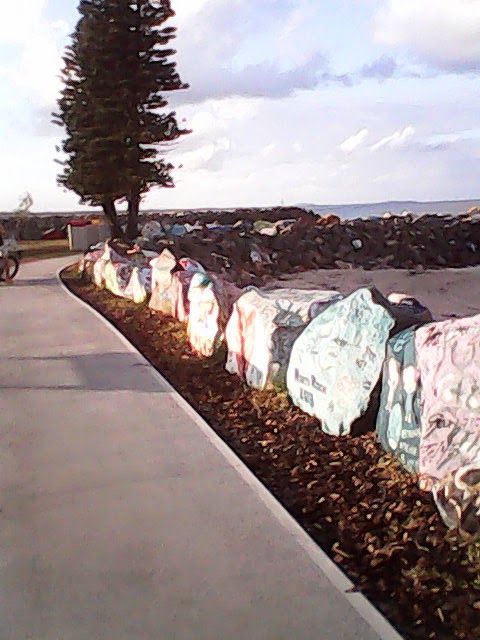 I was again fortunate enough to see a beautiful sunset which my phone camera minus telefoto could not do justice to. 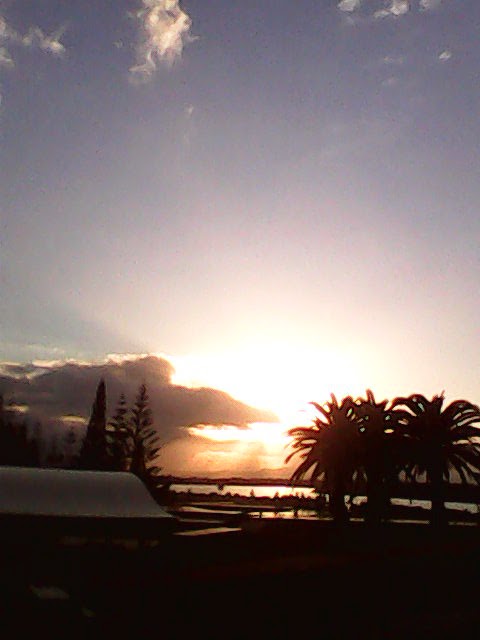 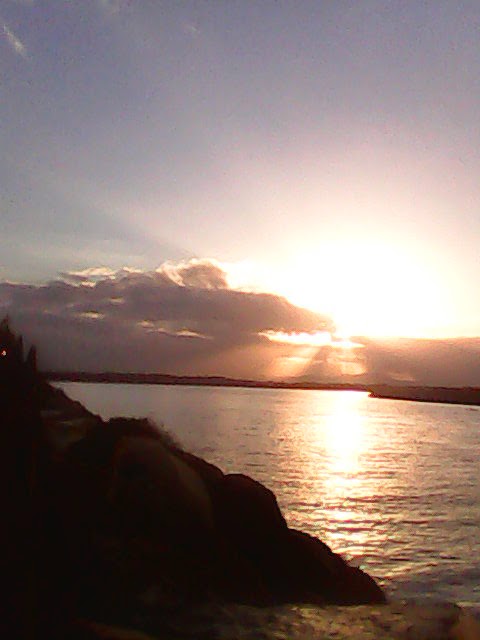 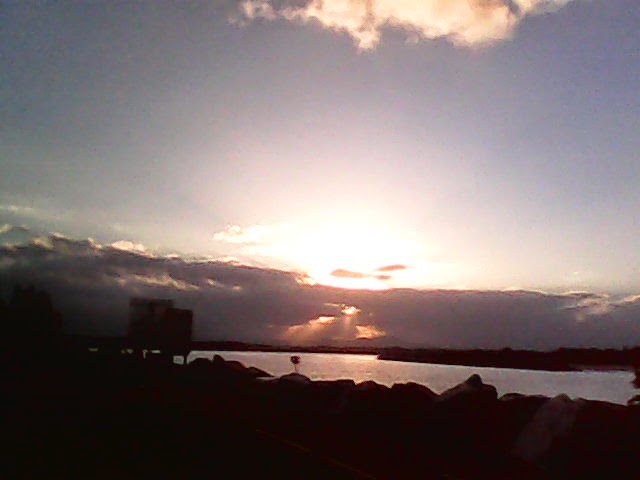 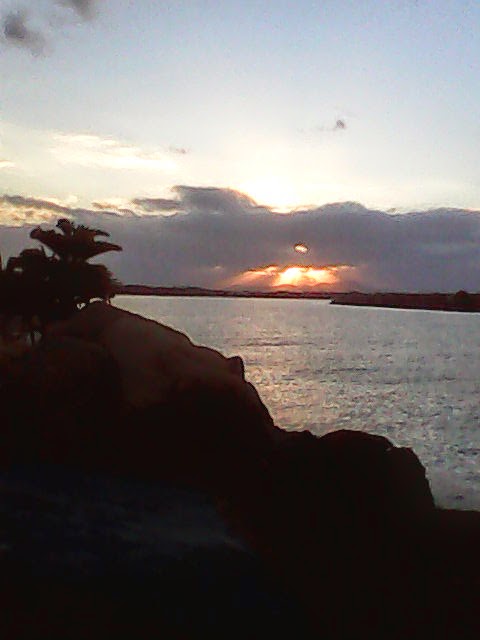 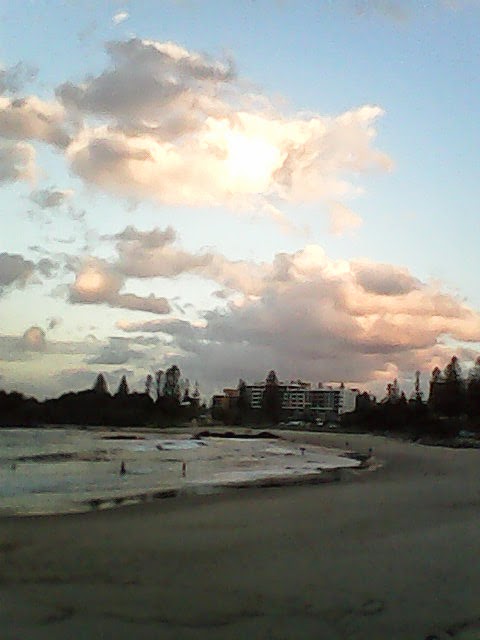 I returned to my camp that I had identified as suitably quiet enough, that I would not disturb anyone and went down to the beach to cook my meal for the night. It was dark and quite chilly with a heavy dew building, so I decided to move up near to the bowls club where there was better shelter. The following morning I was amazed at the numbers of keep fit enthusiasts. I find the Australians are split into two distinct camps. Super fit or uber fat with very few grades inbetween. I breakfasted and headed off to the library to finish off work I started the day before and then headed off towards Coffs Harbour.

I stopped off at Kempsey and called in at the Tourist Information Office for maps and information. I don't usually mention the lovely people who manage these offices, but on this occasion I will. The staff there, Angela and Carissa were not only helpful but engaged in discussions about Australian attitudes and how they were changing etc. I could have stayed there for hours discussing Australian life, had I not had little time to follow there recommendations for the remaining days ride.

That advice was to visit South West Rocks which entailed a ride along the south side of the river Macleay and returning along the north side and back to the highway. It wasn't as spectacular as I had hoped, but that was mainly down to the grey skies and the cold wind, but the rocks and the views not only from there but also the lighthouse made up for the it. 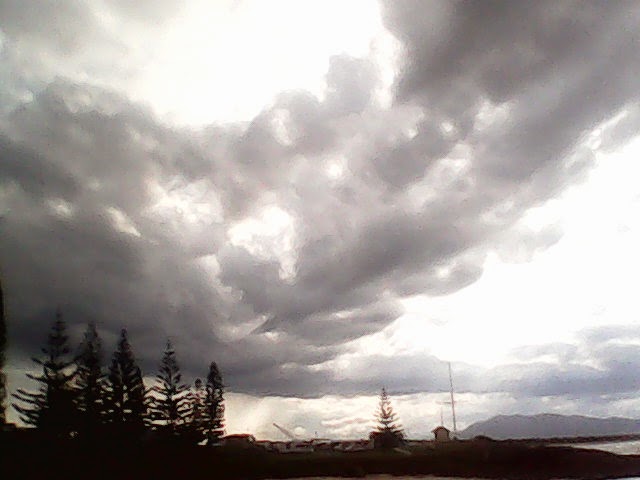 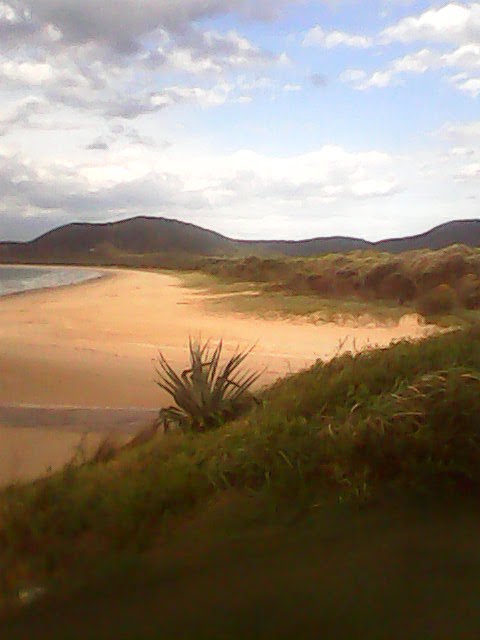 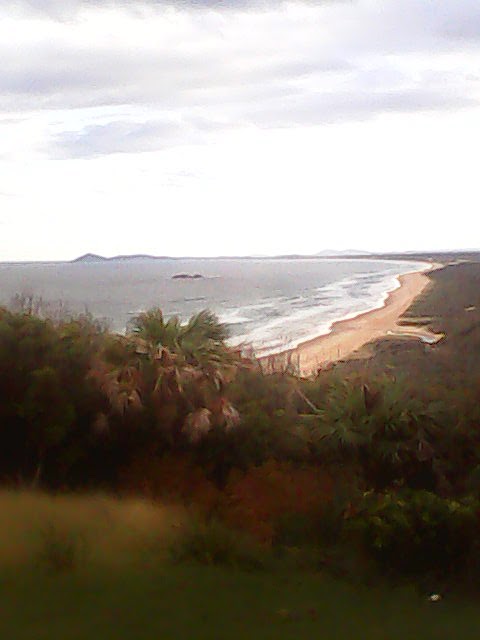 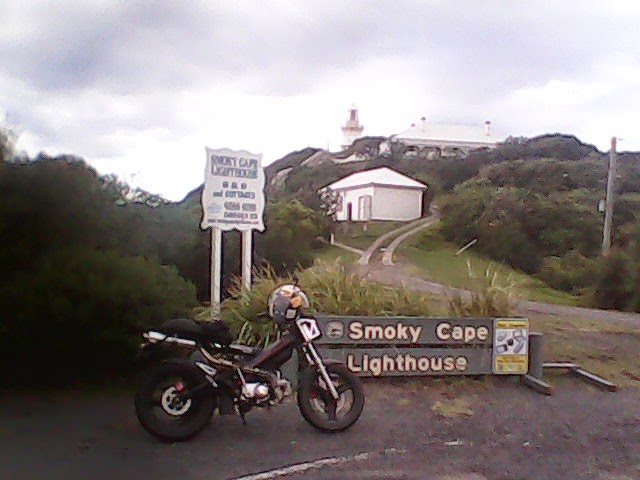 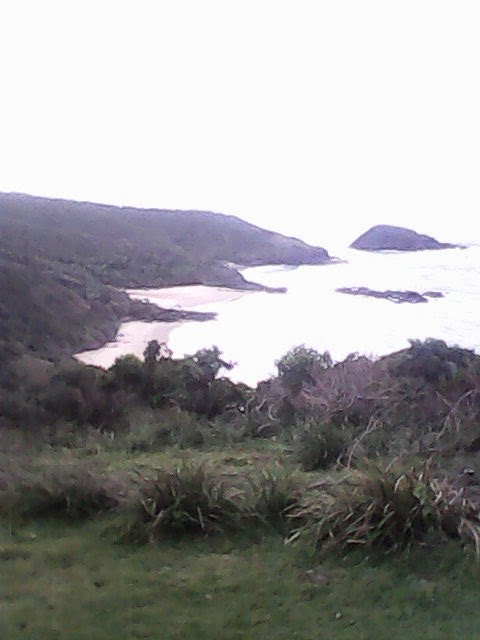 I was on the way out from the light house when I eventually saw my first kangaroo. I was beginning to think that the kangaroo was a mythical animal, as I had only seen dead ones at the side of the road that could have been made of fibre glass the way they lay on their sides with one leg suspended in mid air, but no. Here was a live one hopping down the road ahead of me before seeking the sanctuary of the nearby fields. 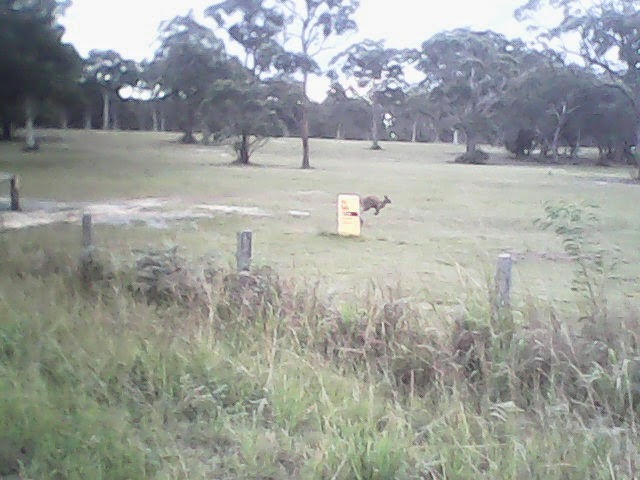 I arrived back on yhr highway and experienced the first rain since Sydney. It was rather strange to see the clouds spilling over the hill tops to the west as well as strage to feel the stinging rain on my face which I hadn't experienced since Victoria. 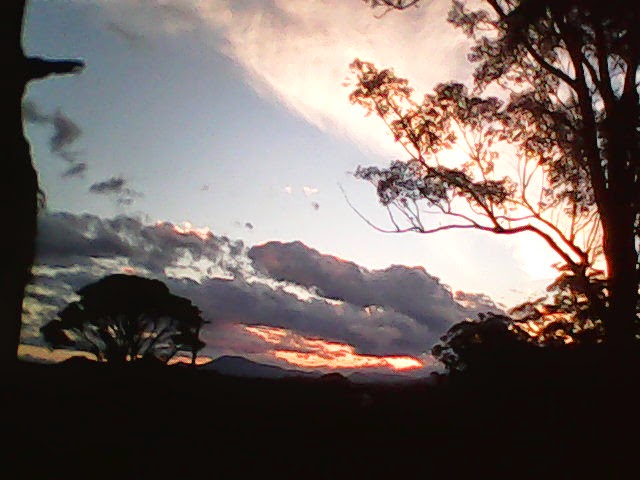 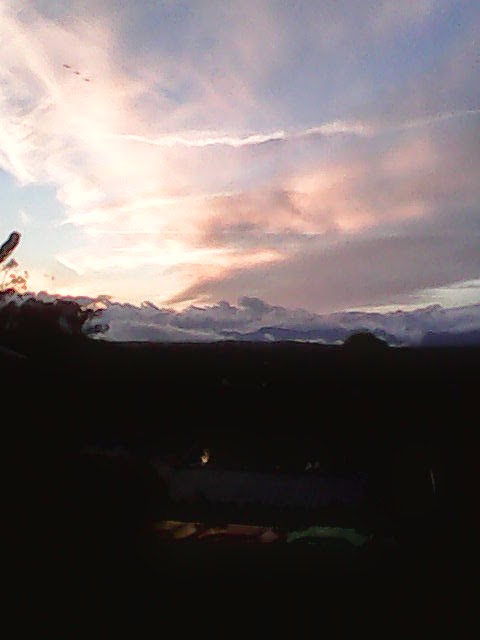 I decided to stop at Urunga instead of Coffs Harbour. Urunga is a very quiet nondescript place that was advertising itself as an alternative stop for tourists. I feel it has a long way to go in signposting and facilities to be taken seriously. The pub was very friendly though and I enjoyed a couple of schooners before nightfall.
at May 10, 2014