And so with my new waterproof suit on, I headed off on a cold grey day, in thew direction of New South Wales. I wasn't prepared for this type of weather as I had hoped to leave four weeks earlier, but the suit was doing a job for me. The rain wasn't far away and was hugging the hills to the north of me, but when the road swung to Maffra it took me within a whisker of a deluge that had obliterated the hills there.

The sun came out momentarily at Bairndale and I stopped to take coffee and toilets and came across this very talented fourteen year old. Not only was Leticia talented but she had the courage to stand alone and sing unaccompanied too. She has obvious desires to be a singer and nothing is going to stop her. She was an inspiration to me as I will reveal in the Sydney story 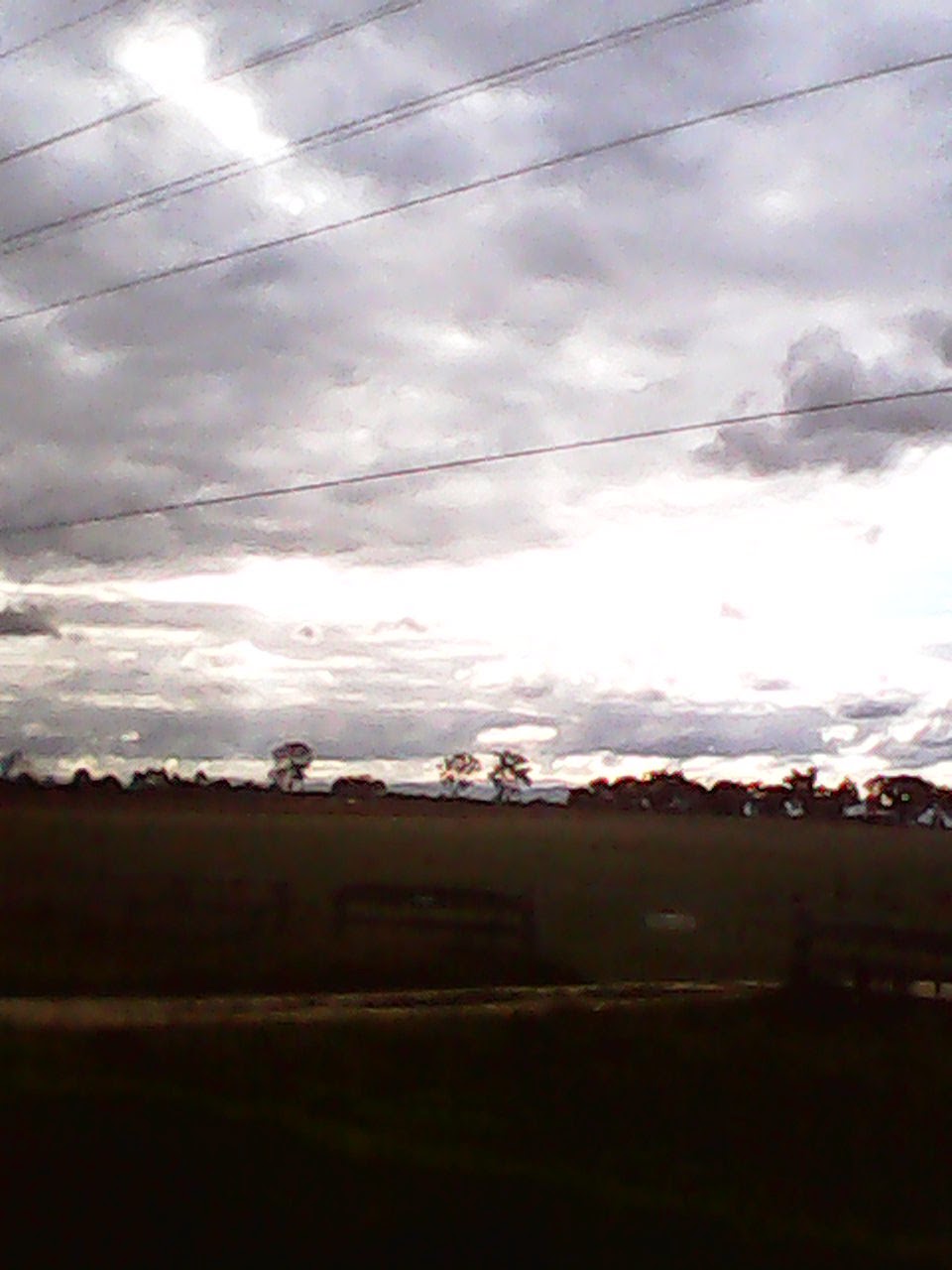 I escaped and was hugging the white line to the left and occasionally onto the shoulder to let motorists pass me. The patience of Australian drivers is to be commended. They would not cross the double white even if there was a clear shot at passing me and would hold back leaving a good distance between us. When I had a chance to pull over to the shoulder they still hesitated and wouldn't pass until I waved them through. Most times there was a thank you signal and occasionally I noticed that the reason they were stalling, was for the passenger to take a photo of my painted back pack.

It's a long road down to Lakes Entrance but I eventually arrived and found a picnic area that was too full of kids to stop and brew up. I went looking for a quieter spot, but not before being approached by a woman with a shaved head, wanting to talk about the Leukaemia Foundation. I mistook her for someone who had finished chemo therapy, but it turned out she had shaved her head for the 'worlds biggest shave' day.

The wind was really cold and strong and there was no shelter on the front, so tail between my legs and a bottle of wine in my bag I returned to the crazy park. It was empty and I was able to cook up, brew up, drink up, and get my head down behind the bbq stove out of the wind. 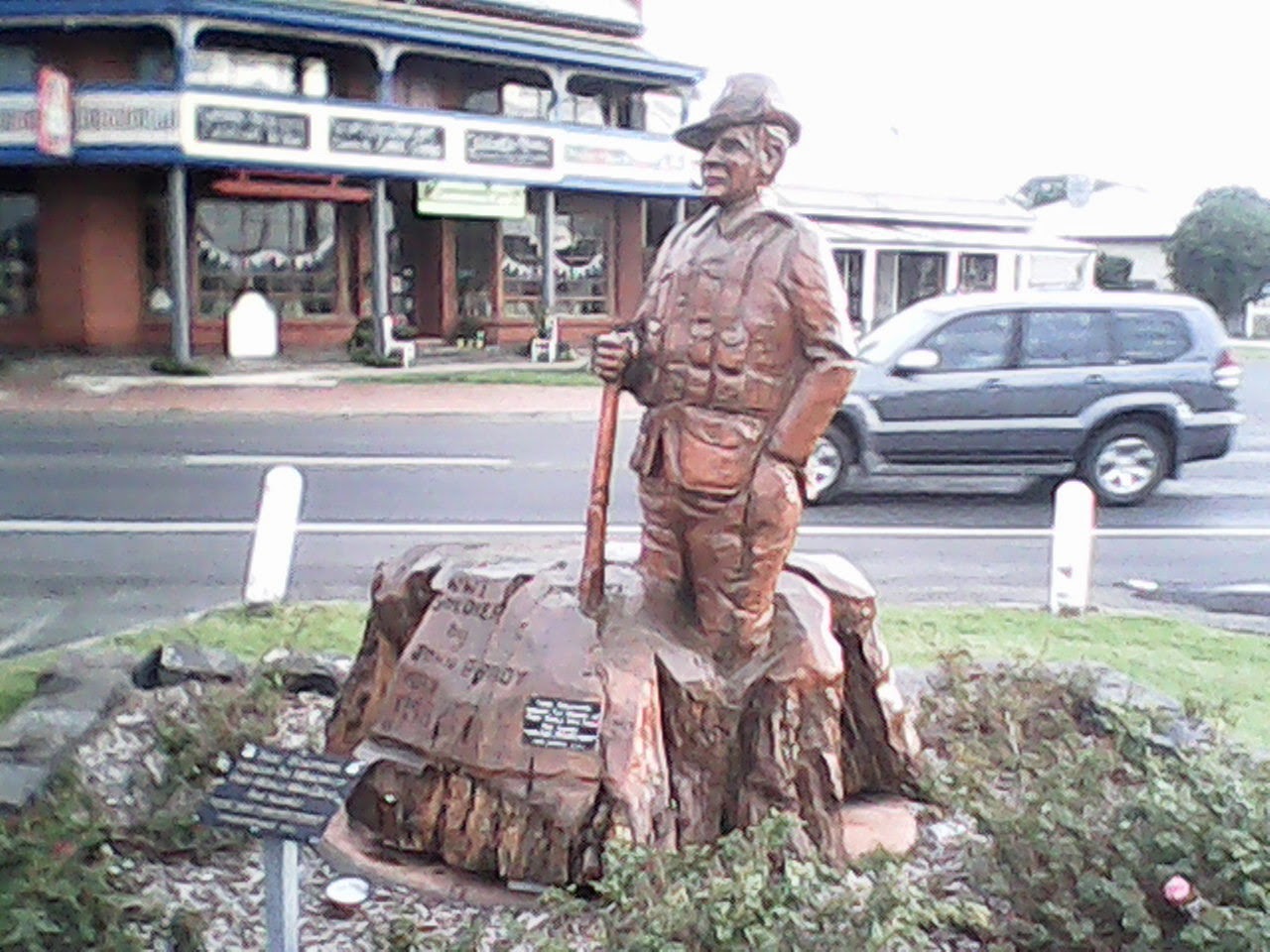 The next morning was sunny but still cool and before I set off to Eden I took a look at the wood carved sculptures of the first world war soldiers. I thought I should having a scultor background and I was impressed by the detail afforded to these figures, which were carved by chain saw.

The road was incredibly straight and ran through National Park forests, that showed signs of forest fires. 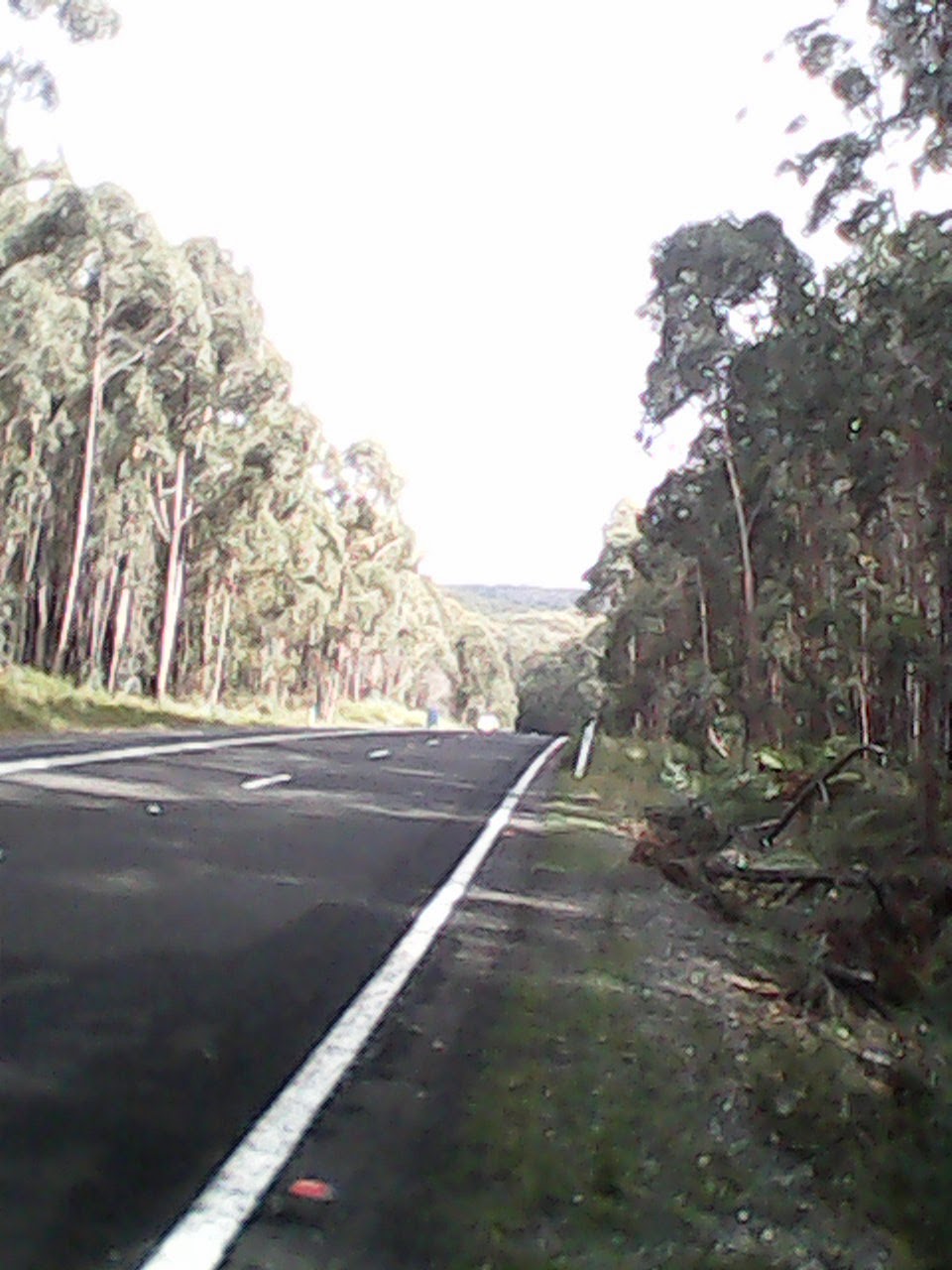 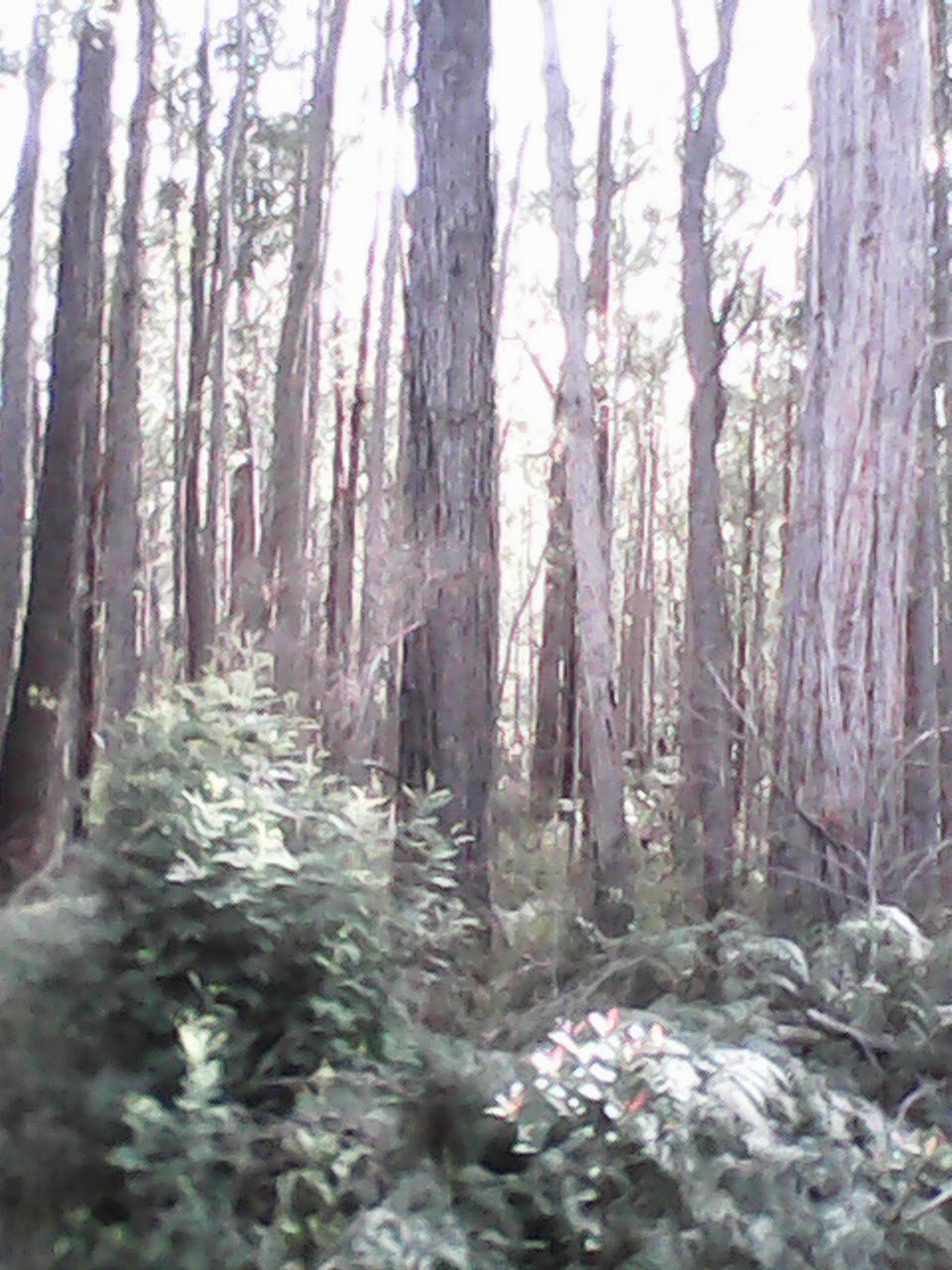 The air was also very cool in the shade of all these trees.so the first chance I had to get some sunshine I took it. That was at Malacoota. The road down had some nice bends but I noticed where ever there was a rough surface, the wheel would skip straight over the roughness leaving the bike occasionally skipping sideways round bends. Malacoota was very sleepy and I headed down to the beach which was pleasant enough with the usual surfers at play. I rode back to the centre, filled up and headed for Eden and New South Wales, taking care on the bends. 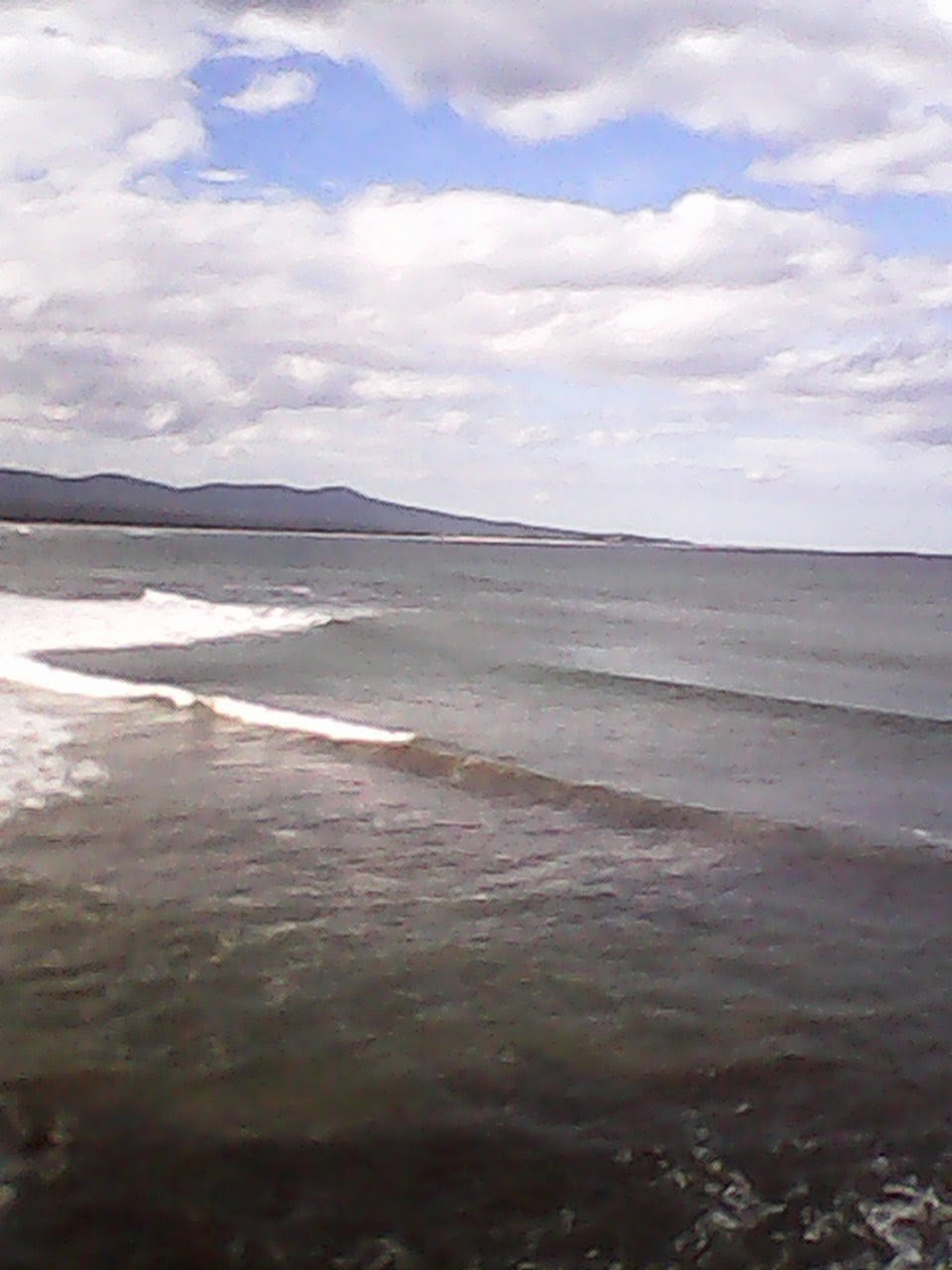 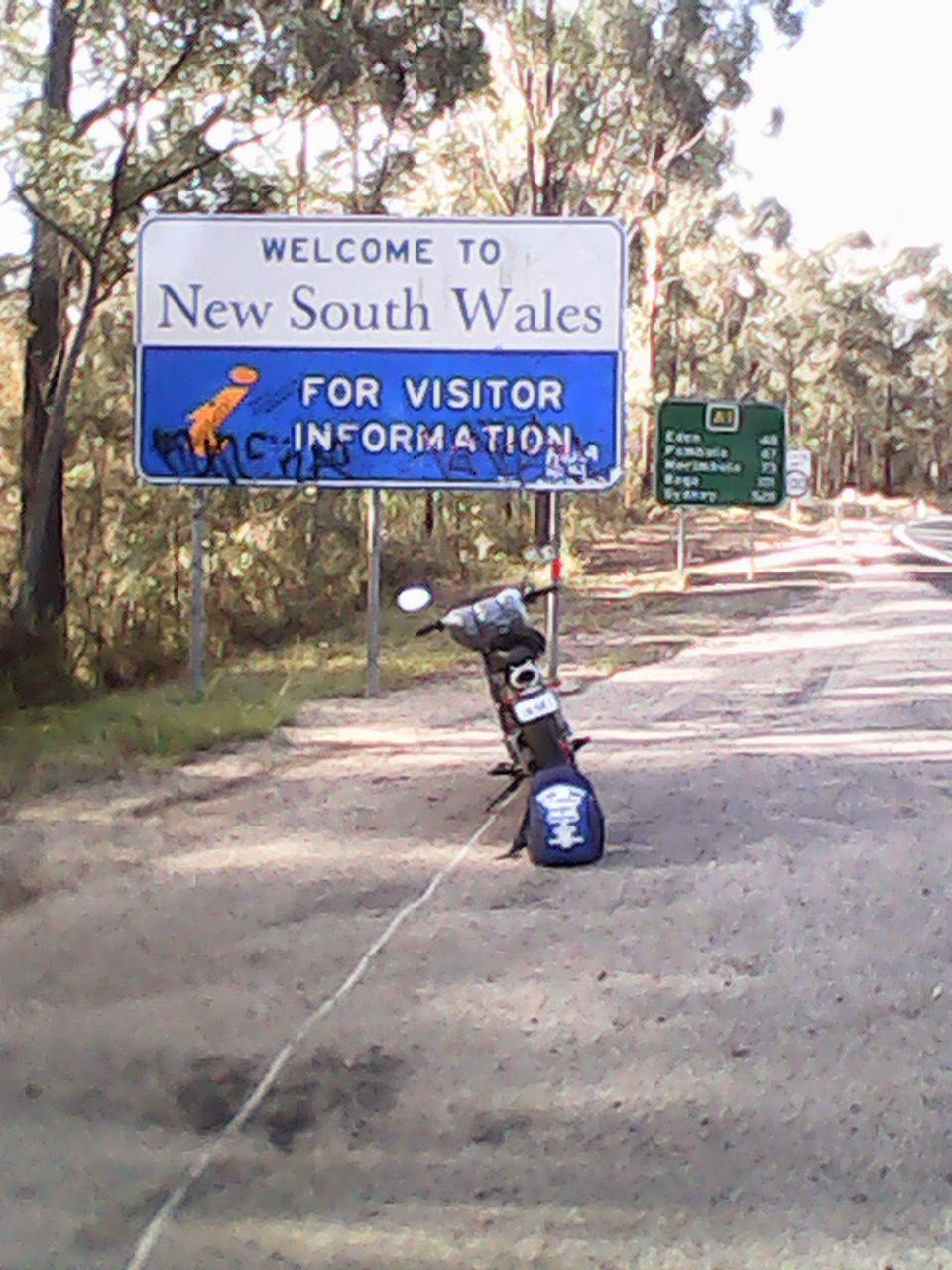 I rejoined the highway and it was only minutes to the border and this gave me a sense of anticipation of warmer days heading North.

The first stop was Eden. I think famous for its whaling links in the past. I was most disappointed. Maybe it was the name, that gave me a sense of something wonderful was there. The only thing I remember is the cemetery near the beach. They really like to give the deceased a good spot to enjoy there eternity, as I noticed many more cemeteries situated on headlands and near beaches on the route. 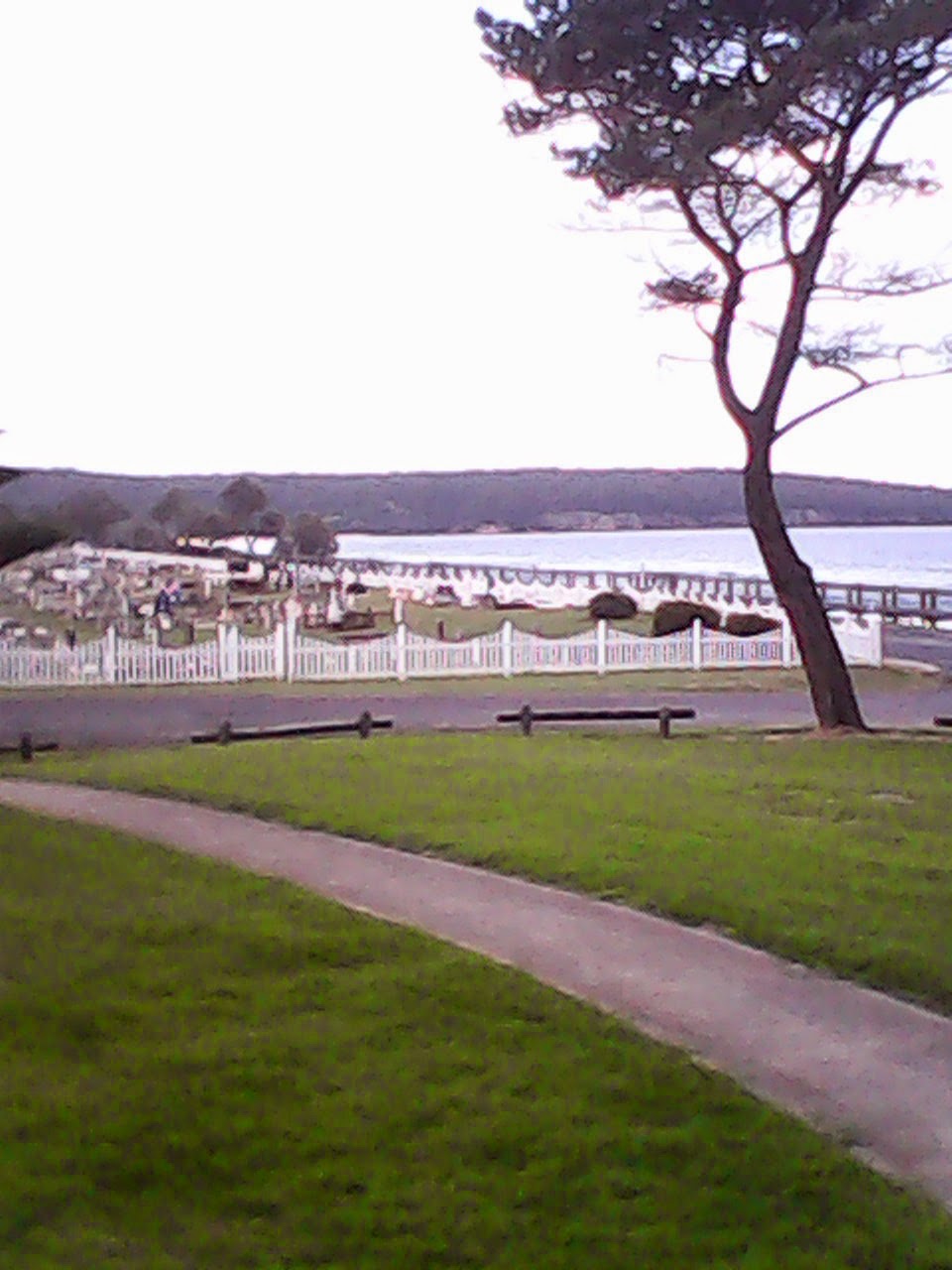 Leaving disappointed I headed for the town of Merimbula situated at the entrance to Merimbula Lake, believe it or not. It was already nearing dusk and I was looking for a park or BBQ area to cook and sleep at. I found nothing following the route out of town except of course a bottlo. (liquor store). A cheap purchase of $5 dollar bottle of wine and back over the lake entrance I found between a beach and a housing estate a lovely park area, where I settled for the night. Waking I was even tempted to have my first Ocean bath time.

Riding out from Merimbula and after stopping to admire more wonderful beaches at Tathra  I started to hear a metallic sound which I believed to be a noise from the engine. I was riding round some wonderful bends on a warm sunny day hoping to visit Nelsons Lagoon. I saw the sign post and headed down a dirt track to the beach there. The ringing noise of metal was getting louder, but I continued rather than sort it in the woods. I reached the bottom of the track at the car park and immediately tried to locate the problem. I had stopped riding and the noise continued so it must be the engine. I switched the engine off and the noise continued. It was coming from up in the trees and thankfully there was local person on hand to explain that the sound I was hearing was in a fact a bird. An innoccuous looking little bird that makes the sound of a bell ringing.